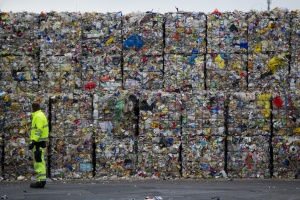 An employee of Alba waste recycling company stands next to plastic packaging bundles in the courtyard of a recycling plant in Berlin on December 15, 2011. (AFP PHOTO / JOHANNES EISELE)

(AFP) - The European Union unveiled plans Tuesday for all plastic packaging in Europe to be recyclable by 2030 and phase out single-use plastic like coffee cups to fight pollution.

The strategy announced by the European Commission, the EU-executive, follows China's decision to ban imports of foreign waste products for recycling, including huge quantities from Europe.

"The commission aims to increase plastic recycling and for all plastic packaging to be reusable or recyclable by 2030," the executive body said.

The Commission said its proposals also aim to create business opportunities by transforming the way plastic products are designed, produced and recycled in Europe.

The EU currently exports half of its collected and sorted plastics, 85 percent of which goes to China.

Commission First Vice President Frans Timmermans said: "We must stop plastics getting into our water, our food, and even our bodies. The only long-term solution is to reduce plastic waste by recycling and reusing more."

"The Chinese decision is undoubtedly a big challenge but let's turn that challenge into an opportunity," he added.

The Commission's strategy aims to rid the seas and oceans from the "700 kilogrammes" of plastics it says get washed up each day, and it "will take measures to limit the use of microplastics" found in cosmetics and detergents.

Proposed new rules on ports and the shipping industry are aimed at making sure waste generated at sea by ships is not released into the water.

An additional 100 million euros was also promised to fund research into promoting technical innovations for tackling the problem.

The Commission has already taken a number of steps to try to reduce plastic, particularly single-use shopping bags.

The proposals did not contain plans for a tax on plastic packaging, which budget commissioner Guenther Oettinger proposed last week to fight pollution and to help plug a hole of around 13 billion euros in the bloc's budget caused by Brexit.

"We have not found a way to introduce a European-wide plastic tax yet," Vice President Jyrki Katainen, who is responsible for jobs and investment, told reporters.

"It is too early to promise anything."

The Commission said Europeans generate 25 million tonnes of plastic waste annually, but less than 30 percent is collected for recycling.

Timmermans called for promoting awareness, urging parents to tell their children that a plastic straw takes only a second to produce but 500 years to degrade, and said the commission ultimately wants to ban microplastics.

Katainen said the strategy is "a great opportunity for European industry to develop global leadership in new technology and materials."

He added Europe does not yet have a functioning single recycling market for plastic as there are no set standards.

According to Plastics Europe, the Brussels-based association of European plastics manufacturers, the industry is worth 340 billion euros (2015 figures) in the EU, and employs more than 1.5 million people.

Its executive director Karl-H. Foerster said: "We... are committed to ensuring high rates of reuse and recycling with the ambition to reach 60 percent for plastic packaging by 2030. This will help achieve our goal of 100 percent reuse, recycling and recovery of all plastics packaging at European level by 2040."

He added: "Only a legally binding landfill restriction on all recyclable and other recoverable post-consumer waste will put an end to the landfilling of all waste which can be used as a resource."