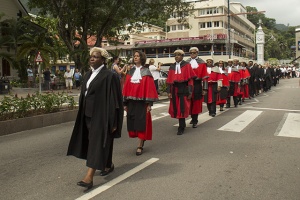 The church service was followed by a procession through the island nation’s capital led by the chief justice. (Salifa Karapetyan, Seychelles News Agency)

(Seychelles News Agency) - The Seychelles Supreme Court re-opened for 2018 on Wednesday under a new theme -- ‘A judiciary we can trust’ -- which the chief justice Mathilda Twomey said reflects the court's commitment to integrity, transparency and accountability.

“In choosing our theme ‘A judiciary we can trust,’ we feel that the time has come for us to invite both our supporters and our cynics to scrutinise our work thus far and reassure themselves that we are indeed a judiciary fit to perform its role,” said Twomey.

The re-opening of the court started with the traditional religious service which this year was held at the St. Paul’s Cathedral of the Anglican Church. The service was followed by a procession through the island nation’s capital led by the chief justice.

The ceremony ended at the Palais de Justice at Ile du Port, a man-made island on the outskirts of Victoria, the capital of Seychelles, an archipelago in the western Indian Ocean.

In her address, the chief justice said that although the judiciary has faced solid criticism for its uncompromising and disciplined approach, it is time to acknowledge that is has borne fruit. “We are a more confident judiciary, better able to deliver on our promises,” she added.

Although much has been achieved in the past two years, Twomey said that she has noticed an inherent distrust of the system by some residents. Every day people write or come in to complain that their lawyer, or the courts, or the police or the registries are conspiring against them, are holding personal vendettas.

The chief justice explained that on many occasions the complainant is a victim of the weaknesses in the processes or a lack of resources and personnel and that the judiciary’s efforts in coming years will aim to meet these challenges too.

When speaking on the review of 2016 and 2017, Twomey said there is a significant rise in court usage time and an improvement in the disposal rate of cases in line with the Delay Reduction Time guidelines.

On the plan for 2018, the chief justice said, “We will continue to aim for constitutional and commercial cases to be completed in six months, criminal cases within a year and civil cases within two years from the filing date.”

Twomey ended her address by encouraging the public to seek the truth behind stories they hear and journalists and those who will comment on matters related to justice to exercise a greater commitment to truth founded in verifiable fact.