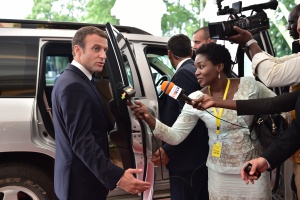 French President Emmanuel Macron (1st-L) leaves after a G5 Sahel summit, in Bamako, on July 2, 2017, to boost Western backing for a regional anti-jihadist force for the Sahel region amid mounting insecurity and cross-border trafficking. The so-called "G5 Sahel" countries just south of the Sahara -- Burkina Faso, Chad, Mali, Mauritania and Niger -- have pledged to fight jihadists on their own soil with instability and Islamist attacks on the rise. Based in Sevare, central Mali, the 5,000-strong G5 Sahel force aims to bolster 12,000 UN peacekeepers and France's own 4,000-member Operation Barkhane, which is operating in the region. (CHRISTOPHE ARCHAMBAULT / POOL / AFP)

(AFP) - Three civilians were wounded in Burkina Faso on Monday after a grenade was thrown at French troops shortly before President Emmanuel Macron touched down for the start of his first Africa tour.

The French president is embarking on a three-day trip of western Africa aimed at boosting France's regional influence, stemming the continent's migrant exodus and bolstering the fight against violent Islamist militancy in the Sahel.

The visit was marred by an attempted attack on French troops in the capital Ouagadougou just hours before Macron's arrival.

"Two hooded individuals on a motorcycle threw a grenade towards a French army vehicle" as it made its way to a barracks housing French special forces, a security source told AFP on condition of anonymity.

Three residents were wounded, one seriously, in the attack which took place at 8:00 pm (2000 GMT), the source added.

"The attackers' target was the French army vehicle, which was not hit," the source said.

An AFP reporter at the scene of the attack witnessed a small hole in the tarmac where the grenade detonated and a damaged civilian vehicle.

Macron flew into Ouagadougou three hours later for a trip that will take in Burkina Faso and Ivory Coast -- two former French colonies that deposed strongmen leaders in recent years -- as well as to Ghana.

His advisors say his primary message will be to stress a partnership of equals with Africa, based on education and entrepreneurship.

European leaders are desperate to find ways to stem the flow of African migrants across the Mediterranean without leaving them to the mercy of traffickers in transit countries like Libya, where they face torture, rape, and -- as a CNN report showed recently -- being sold into slavery.

And Macron will also be seeking international backing for a new, five-nation African counter-terrorism force, which France hopes to see eventually take over the fight against jihadist groups in the Sahel region.

Ouagadougou has suffered two recent terror attacks carried out by Islamist militants -- a shooting spree in January 2016 that left 20 dead and a similar assault by gunmen in August that killed 19.

French special forces have been present in the country since 2010 to help regional governments tackle jihadist violence in the Sahel, particularly in neighbouring Mali.

Shortly after meeting his Burkinese counterpart Roch Marc Christian Kabore, Macron told reporters his trip hailed "a new stage for our relationship with your country and the whole continent".

He praised his host country for shaking off the 27-year authoritarian rule of former President Blaise Compaore in a 2014 popular uprising in which large numbers of youths participated.

Burkina "is an emblem of the democratic aspirations of Africa's youth", he said.

"I wanted to pay tribute to all this by making Ouagadougou the first step of my African tour," he added.

After talks with Kabore, Macron will deliver a speech to 800 students at the University of Ougadougou followed by an "unfiltered" question and answer session with his young audience.

On Wednesday he will visit a giant solar power plant in Burkina Faso, the largest in West Africa, before departing for the Ivorian capital Abidjan where the fifth Europe-Africa summit will bring together more than 80 leaders from the two continents.

He will also inaugurate the city's colossal metro project, funded by a 1.4-billion-euro ($1.6-billion) French loan before heading to Ghana, a former British colony.