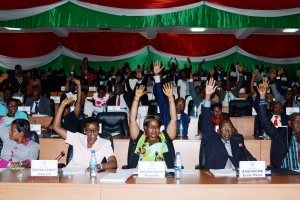 Members of Burundi's National Assembly raise their arm to vote on October 12, 2016 in Bujumbura, for the withdrawal of the International Criminal Court (ICC) from the capital, after the UN began an enquiry into human rights abuses in the turbulent nation. The draft law was passed with 94 votes in favour, two against and 14 abstentions. It will next go to the Senate -- also dominated by the ruling party -- before being approved by President Pierre Nkurunziza. In April, ICC prosecutor Fatou Bensouda said she was conducting a "preliminary examination" of the situation in Burundi -- the first step towards a full investigation and possible prosecutions -- looking into allegations including murder, torture, rape and forced disappearances. (ONESPHORE NIBIGIRA / AFP)

(AFP) - Thousands of Burundians on Saturday answered the government's call to celebrate the country's withdrawal from the International Criminal Court, cheering the "historic" day using slogans such as "bye bye ICC".

Burundi on Friday became the first ever nation to leave the world's only permanent war crimes tribunal, set up some 15 years ago to prosecute those behind the worst atrocities on the planet.

Burundi hailed it as a "historic" day and called on people to rally across the country on Saturday.

Some 5,000 people -- including hundreds of drivers of bicycle taxis, motorcycle taxis and tuk-tuks -- marched through the streets of the capital Bujumbura, singing and dancing to the sound of a brass band.

Burundi mediator Edouard Nduwimana called on the demonstrators "to pray for the other African countries so they can follow Burundi's example".

Nduwimana branded the ICC "arrogant", saying the tribunal was "contemptuous towards us" and wanted "to pursue victims instead of their persecutors".

Other demonstrations were held simultaneously in other major towns, national radio reported.

Activists have mourned what was seen as a major blow to international justice, with Lambert Nigarura, president of the Burundi Coalition for the ICC, saying that Bujumbura's decision to withdraw came "at a time when the machine continues to kill with impunity in Burundi".

ICC officials said Friday however that a preliminary probe launched by the prosecutor in April 2016 into possible crimes against humanity in the central African nation would continue.

The probe, started by ICC chief prosecutor Fatou Bensouda, was initiated after reports of "killing, imprisonment, torture, rape and other forms of sexual violence, as well as cases of enforced disappearances" in the country.

The reports came amid a violent political crisis triggered when President Pierre Nkurunziza ran for a third term in office, winning July 2015 elections which were boycotted by the opposition.

Overall, the violence in Burundi has claimed between 500 and 2,000 lives, according to differing tolls provided by the UN or charity groups and more than 400,000 Burundians have fled abroad.

Set up in 2002, the ICC based in The Hague has often come under fire from some countries who claim it is unfairly targeting African nations.