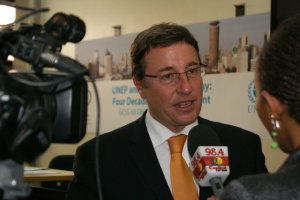 A heavy presence of security officers drawn from elite detachments of the police are visibly present patrolling Nairobi and its environs following the rising insecurity in the country and the recent massacre of over 60 people in Lamu County.

Described by the organizers as the first ever “highest level UN body ever convened on the environment” UNEA’s week-long meeting will bring together over 1300 ministers, chief justices, economists and leading civil society members. More than 160 environment ministers are currently in Nairobi to attend the global meeting which is a milestone for the United Nations Environment Programme (UNEP) history that dates back to 1972.

“The convening of the first UNEA session, home of UNEP and the often referred to as the environmental capital of the world, represents a coming of age for the global environment community,” says Achim Steiner, Executive Director of UNEP.

“A broad range of actors from the world of economy, finance social sciences, legislation, the judiciary and development are also due to participate to help shape the global environment agenda under the stewardship of UNEA. The issues facing this first session of UNEA are weighty ones which require the voices of all member states and partners to be heard.”

The environmental rule of law and illegal trade in wildlife are the key items on the agenda being discussed at UNEA. This is the first time that all the 193 members of the UN together with those accredited observer states and major civil society stakeholders are represented. Before UNEA was adopted, a governing council consisting of 58 nations governed UNEP which was set up in 1972.

In 2012 during the United Nations Conference on Sustainable Development (also known as Rio+20 summit, as the first was held in 1992) in Brazil, it was agreed that UNEP needed to be reformed. A recommendation was made to the UN General Assembly recommending that the governing council had to pave way for a new more authoritative decision making organ with wide representation. In 2013 the UN General Assembly adopted a resolution that effectively brought all members of the UN into UNEP and renamed its governing council into UNEA. It is this decision that saw Nairobi becoming the “global environmental capital.”

“Now more than ever it has become increasingly clear that the dichotomy between environmental sustainability and economic and social development should be overcome through the careful management of natural resources as the keystone of a prosperous and stable society.”

Steiner who has been UNEP’s boss since 2006 says. Before joining UNEP, Steiner had worked as the Secretary General of the World Commission on Dams and in 2001 joined the International Union for Conservation of Nature (IUCN) as Director General. He left IUCN for UNEP in 2006. A Brazilian and German national Steiner has previously worked in Zimbabwe, Vietnam, Switzerland, India, Germany, USA, Pakistan, South Africa and Kenya.

“In this new forum, UNEP and its partners will be able to provide governments and other policy makers with the science, policy options and platform for international cooperation to more effectively address the environmental dimension of sustainable development.” Steiner says.

The Seychelles Minister for Environment and Energy, Professor Rolph Payet accompanied by Flavien Joubert, Director General for the Wildlife Enforcement and Permits Division in the ministry are attending the meeting.

In a press statement, the Seychelles Ministry of Environment and Energy says Payet has been invited to moderate the ministerial session on ‘Ensuring a healthy environment, restoring natural assets, and enhancing durability of infrastructure, for the needs of today’s and future generations’.

The UNEA meeting which closes this Friday June 27 is a big boost to Nairobi which is also the main UN hub in the third world owing to the United Nations Office in Nairobi (UNON) which brings together more than 60 UN agencies, programmes and funds.