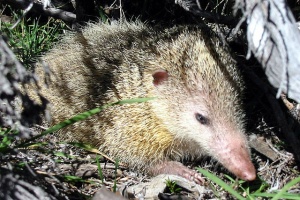 The SIF project is to control tenrec known locally as 'tang' in the Vallee de Mai. (Markus Fink) CC BY-SA 3.0

(Seychelles News Agency) - Experts from Mauritius will be working with the Seychelles Islands Foundation (SIF) to find ways to control an indigenous species in the palm forest of Vallee de Mai, an official of the foundation said.

The foundation is spearheading a project to catch and collect tenrecs -- locally known as ‘tang’ -- in the Vallee de Mai, on Praslin, the second-most populated island.

The local team and regional experts will look at ways of catching the tenrecs and collecting the first baseline set of data on the species in Seychelles, including information on population dynamics, size and impacts on native fauna.

“As the Vallee de Mai is an ecologically sensitive area, we will only be using different types of live traps,” said the SIF project and science coordinator, Annabelle Constance.

Tenrecs, a species of mammal resembling hedgehogs found in Madagascar and some African countries, were introduced in Seychelles, an archipelago in the western Indian Ocean, probably as a food item, the Seychelles Islands Foundation said. The small mammal is a food source for the people of Madagascar and consumed in Reunion and Mauritius.

The control of tenrecs in the Vallee de Mai, one of the Seychelles' UNESCO sites, is part of a holistic approach of the foundation under the International Union for Conservation of Nature (IUCN)’s Inva'Ziles fund. The project aims at managing invasive alien species and thus bringing ecosystem-wide benefits to the Vallee de Mai, where the endemic coco de mer, the world’s largest nut, grows naturally.

Constance said that routine monitoring of reptiles and amphibians will be done as part of the project to monitor the before and after impacts of the tenrec control.

The SIF project and science coordinator said the project will also determine which control mechanisms are best. She added that the findings will be shared and “we hope that in future other areas can apply the lessons learnt.”

The foundation said there is a need to control this species, because although it is common on Mahe, the main island and Praslin, their impacts on native species are unknown. It is assumed that due to predation they affect endemic amphibians, reptiles and invertebrate fauna.

Although the routine control of tenrec is a new initiative for Seychelles, Constance said that it is already targeted elsewhere in the Indian Ocean.

“For example in Mauritius, the Mauritian Wildlife Foundation is catching tenrecs opportunistically and in targeted efforts in some protected areas,” said Constance.