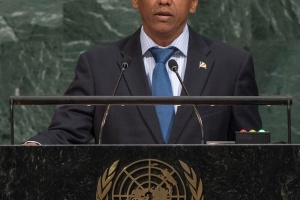 Faure was elected president of the SIDS DOCK on Saturday for a one-year term on the sidelines of the United Nations General Assembly in New York. (State House)

Faure was elected president of the initiative on Saturday for a one-year term,  at the third annual meeting of the SIDS DOCK assembly on the sidelines of the United Nations General Assembly (UNGA) by world leaders in New York.

The president of Seychelles, whose term with SIDS DOCK ends next September at the next meeting of the group, succeeds the Prime Minister of Tuvalu, a Polynesian island nation in the Pacific Ocean.

Established in September last year, SIDS DOCK is an initiative of the Alliance of Small Island States (AOSIS). It is so named because it is designed as a docking station to connect the energy sector in Small Islands Developing States (SIDS) with the global markets for carbon, finance and sustainable energy technologies.

SIDS DOCK is the only small island developing states body to be officially recognised by the United Nations as a UN Treaty organisation. Another one of its objectives is to help generate financial resources to help SIDS address adaptation to climate change which has become even more urgent given the devastation increasingly violent storms are causing to small island states.

Seychelles' permanent representative to the UN, Ronny Jumeau, was re-elected a member of the initiative’s executive council for a second term.

In addressing the meeting, Jumeau noted that Seychelles was actively involved in, and an enthusiastic supporter of, the establishment of SIDS DOCK from the beginning.

“Small island developing states had led on the issues of clean energy and sustainability long before the term Sustainable Development Goals was coined, and when we still had no idea when the world would reach a climate change agreement,” said Jumeau.

In this year’s meeting, plans and strategies for transitioning to clean energy featured prominently in SIDS’ pledges to the Paris Agreement on climate change. This was very much due to the disastrous hurricanes in the Caribbean which had devastated some member states of SIDS DOCK.

“President Faure and Seychelles send you our condolences reinforced by a message of strength, solidarity and island resilience in the face of the incredible human and economic challenges you now face, and which threaten all members of SIDS DOCK and the Alliance of Small Island States in future,” Jumeau said.

On Friday, another Seychellois, Jeanette Larue, the technical advisor for environment education in the Ministry of Environment, Energy and Climate Change, was elected vice chair of SIDS DOCK Island Women Open Network (IWON) and head of the Public Education and Awareness Programme (PEP).