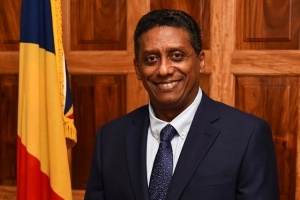 President Danny Faure attended the US President's first meeting with world leaders on Monday advocating for reforms of the United Nations. (State House)

(Seychelles News Agency) - The President of Seychelles Danny Faure and more than 100 other heads of states attended the first ever meeting hosted at the United Nations by Donald Trump, the President of the United States, a communiqué from State House said on Tuesday.

The U.S president hosted his first meeting with world leaders on Monday and advocated for reforms of the United Nations.

According to the New York Times, Trump praised the UN Secretary General António Guterres for tackling mismanagement and bureaucracy.

“And I am confident that if we work together and champion truly bold reforms, the United Nations will emerge as a stronger, more effective, more just and greater force for peace and harmony in the world,” wrote the New York Times.

Members of the Seychelles’ delegation participated in other meetings. The Foreign Secretary of Seychelles, a group of 115 islands in the Indian Ocean, Claude Morel, attended the meeting of foreign ministers of La Francophonie and had bilateral talks with Maldives and Pakistan.

Other members attended high-level events on small island developing states (SIDS) in solidarity with the countries and territories hit by Hurricane Irma and the forthcoming COP23 climate change conference in Bonn in November.

President Faure and his delegation visited and met with the staff of the Seychelles Permanent Mission to the United Nations.