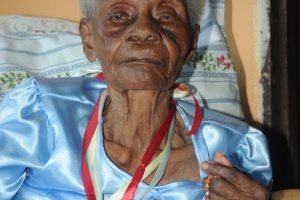 (Seychelles News Agency) - Seychelles has lost another centenarian lady only a week after two of the island’s oldest citizens passed away on the same day.

Marie Ladouce who died Sunday June 15, a little over a month after she had turned 102 years old was buried yesterday.

Ladouce who was born on May 2, 1912, was a resident of Le Niole in the northern part of the main Seychelles island of Mahé.

This is the third centenarian lady that Seychelles has lost recently after Virginia Philoé aged 103 years old and Esmy Eloise Payet aged 101, passed away coincidentally on the same day of last week.

According to information provided to SNA by the Seychelles Ministry for Social Affairs, Community Development and Sports, the oldest of the 9 centenarians are Nancy Marie from English River and Mary Astova Pilate from Bel Air two central districts of Seychelles main island of Mahé.

Both Marie and Pilate are turning 105 years old this year.

Currently there is only one Seychellois male centenarian after two others passed away earlier this year.

Bertie Edouard Mahoune of Plaisance, a district on the outskirts of the capital of Victoria turned 100 years old on May 21, 2014.

According to latest figures available on the Seychelles National Bureau of Statistics website dated to 2013, life expectancy amongst the islanders for both male and female is 74.2 years old.

The data also shows the tendency that Seychellois women tend to live longer than men with the life expectancy for female being 79.5 years and for male 69.3 years.