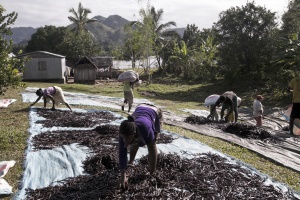 (FILES) This file photo taken on May 25, 2016 in the Municipality Bemalamatra, 30 kms from Sambava shows workers spreading "red vanilla" (vanilla which has been treated by a special cooking) in the sun to be dried. Hit by rampant speculation and a collapse in production following cyclone Enawo, the price of vanilla -- Madagascar's largest export -- has surged in recent months. (RIJASOLO / AFP)

(AFP) - Hit by rampant speculation and a collapse in production following cyclone Enawo, the price of vanilla -- Madagascar's largest export -- has surged in recent months.

Ice cream, aromatherapy, perfume and haute cuisine: all use the spice sourced from the Indian Ocean island which accounts for about 80 percent of global production.

The sudden cash bonanza has threatened to fuel crime and slash quality.

On the single paved road in Ampanefena, a rural community in the northeast of Madagascar, youths pass the time doing wheelies on their high-powered Japanese motorbikes.

Business is booming: since 2015 the price of the spice has soared relentlessly to "a never-before seen peak of between $600 and $750 a kilo,"(510 and 640 euros) according to Georges Geeraerts, president of Madagascar's Group of Vanilla Exporters.

But demand eventually outstripped the supply of around 1,800 tonnes-a-year, spurred on by resurgent calls for organic products, speculation by financiers -- and by tropical cyclone Enawo which ravaged part of the production zone.

"The banks struggled to keep up with the pace," said a French trader speaking on condition of anonymity.

"Money no longer has any meaning, people think it's a free-for-all, it's becoming anarchy," added Vittorio John, a vanilla grower in his 40s.

The price explosion has led to increased thefts from vanilla plantations.

Some growers sleep in their fields to guard their precious crop and several thieves have been beaten, imprisoned or even killed.

"We pay two police to secure the village," said Patrick Razafiarivo, 42, an intermediary between the farmers and the exporters who admits to hiding vanilla underneath his mattress.

"The police made us pay for their 4X4s," said a French exporter.

The authorities admit that they were caught unprepared for the boom.

"The root of all the problems is insecurity caused by a lack of capacity, staff, and force discipline," said Teddy Seramila, the Sava region's development director.

Fear of thefts in the plantations has also forced some growers to pick their pods prematurely, resulting in declining standards.

"People are doing all sorts. They're vacuum packing vanilla that can go bad. Non-experts can be misled over the quality," said an exporter from Madagascar.

"Nothing distinguishes a good pod from a bad pod, you can't tell the difference," exporter Lucia Ranja Salvetat told AFP.

The vanilla trade remains largely unregulated in Madagascar, and the scant rules are seldom enforced.

Each buyer can freely tour villages and negotiate prices directly with the farmers or call intermediaries to get a quote.

"There should be a law applied to everyone but instead people do as they please," said one of the exporters from Madagascar.

"Barely any of the local authorities levy any taxes," said Seramila -- even though vanilla makes up five percent of the country's gross domestic product.

Just 21 percent of people in the region have access to drinking water and only six communities out of 86 are electrified.

"Honestly, we can't succeed in this job. Everybody is manoeuvering and it's the big exporters that are setting the example," said Razafiarivo.

Madagascar's bourbon vanilla is a product of expertise handed down from generation to generation and has been considered the best in the world.

But concerns over quality could deter buyers, handing a victory to the country's main vanilla exporting rivals -- Indonesia and Uganda.

"Everything must come to an end and it's almost certain that there will be a price fall," predicted Geeraerts, the export association chief.

"Vanilla enabled me to go to school, it's a noble commodity. When the price falls, the opportunists will leave -- but we will always be here," said Salvetat.

"We are the old-guard who have forged our future and our children's future with vanilla -- but we are in the process of tearing ourselves apart."