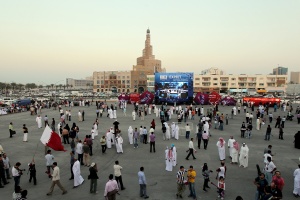 Qataris and foreigners gather at Doha's traditional souk to follow FIFA's decision on who will host the 2022 World Cup on December 2, 2010. (AFP PHOTO/MARWAN NAAMANI)

(AFP) - Qatar, currently boycotted by four Arab states, on Wednesday created a new permanent residents status for certain groups of foreigners, including those who have worked for the benefit of the emirate.

In a first for the Gulf, Qatar's cabinet ministers approved the measures, the official QNA press agency reported, in a move that will likely affect tens of thousands of resident foreigners.

Under the new rules, children with a Qatari mother and a foreign father can benefit from the new status along with foreign residents who have "given service to Qatar" or have "skills that can benefit the country," the agency said.

A specially created interior ministry commission will decide individual cases, according to the Qatar News Agency.

Those deemed eligible for the new status will be afforded the same access as Qataris to free public services, such as health and education.

They will also receive preferable treatment for jobs in the administration and armed services as well as being able to own their own properties and exercise some commercial activities without the need for a Qatari partner.

While stopping short of offering Qatari nationality the new measures constitute a first for the Gulf.

Naturalisation is extremely rare in the region and the status of the millions of foreigners working in the Gulf are strictly limited.

Oil-rich Qatar has a population of 2.4 million people, 90 percent of whom are foreigners, including many from Southeast Asia working in construction.

The move comes as Qatar languishes under a boycott imposed by Regional kingpin Saudi Arabia as well as Bahrain, the United Arab Emirates and Egypt.

The four Arab states broke ties with Qatar on June 5, accusing the emirate of fostering Islamist extremist groups and of ties to Saudi arch-rival Iran. Qatar has denied the allegations.

The four Gulf nations have closed their land and sea borders to Qatar and imposed economic and air traffic restrictions.

Kuwait is leading mediation efforts in the crisis, the worst to grip the region since the 1981 creation of the six-nation Gulf Cooperation Council, which includes Saudi Arabia, UAE, Bahrain and Qatar.

The two other GCC members, Kuwait and Oman, have not joined the Qatar boycott.