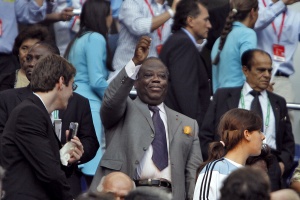 (AFP) - War crimes judges will rule Wednesday whether former Ivorian president Laurent Gbagbo can be released from prison for the rest of his trial on charges arising from deadly election violence that rocked his nation in 2010.

Gbagbo, the first ex-head of state to be tried by the International Criminal Court, has appealed a March decision that he must stay behind bars in a UN detention centre until the end of the legal process.

Both Gbagbo, now 72, and his former militia leader Charles Ble Goude, 45, have pleaded not guilty to four charges of crimes against humanity including murder, rape, and persecution in five months of bloodshed that wracked the Ivory Coast.

About 3,000 people died in the turmoil that swept Abidjan -- once one of Africa's most cosmopolitan cities -- in the aftermath of the November 2010 presidential polls that Gbagbo lost to bitter rival Alassane Ouattara.

His highly divisive trial at the tribunal in The Hague opened in January 2016, and is set to last three to four years.

ICC prosecutors accuse Gbagbo of trying to cling to power "by all means," while his defence team has charged that Ouattara seized power by force with the help of former colonial master France.

Abidjan was turned into a warzone between late 2010 to 2011 as clashes flared between the rival forces. After a months-long standoff, Gbagbo was arrested by Ouattara's troops aided by UN and French forces, and turned over to the ICC in 2011.

In March, his defence team made a new bid to win Gbagbo's release, arguing he "has already been detained for almost six years and has pathologies that affect his physical and psychological wellbeing".

The prosecution said the former Ivorian strongman still enjoyed a strong network of support and if he were freed "could abscond to a territory out of the reach of the court".

In a majority two-to-one decision, the judges ruled he had to stay in jail.

But in a dissenting opinion -- which Gbagbo's defence has seized on -- judge Cuno Tarfusser said his detention "has exceeded the threshold of a reasonable duration and that, in light of his age and health, the risk that he might abscond from justice becomes increasingly unlikely".

A five-judge appeals court will "deliver its judgement" on the appeal at 1430 GMT on Wednesday, the court said in a statement.

His lawyer, Emmanuel Altit, told AFP they are urging the appeals chamber to "apply the law", saying there are strict criteria about keeping people in detention and the initial judges had failed to prove he was a flight risk.

Gbagbo "wants to shed light on the truth, he wants to show what really happened. He wants to show the reality of the networks, which were implicated, including those of the French authorities," Altit said.

Rights activists thought it was unlikely he would be freed. Carrie Comer of the Federation International for Human Rights (FIDH) said her organisation shared concerns that Gbagbo "was a flight risk" and highlighted "the sheer gravity of the crimes that he is accused of."