US will not resume Brazil beef imports until food safety addressed 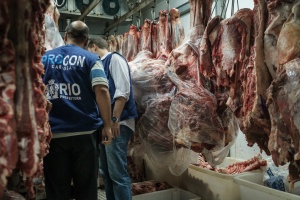 (AFP) - The United States will not resume imports of beef from Brazil until food safety issues have been addressed, US Agriculture Secretary Sonny Perdue said Monday.

Purdue met with his Brazilian counterpart, Blairo Maggi, to discuss the issue after Washington late last month halted all beef imports from the country following a rash of bad shipments discovered in US ports.

"Though Brazil pressed for a timeline for restoration of beef imports... any timeline would have to depend upon progress being made by Brazil," Purdue told the Brazilian official, the USDA said in a statement following the meeting.

The agency's Food Safety and Inspection Service (FSIS) began inspecting all Brazil beef imports in March after a series of bad meat shipments were discovered, and through late June had stopped 11 percent of the beef meant for the US market, about 1.9 million pounds (862,000 kilograms).

The normal rejection rate is one percent, USDA said.

At the time the ban was imposed, Purdue said, "Ensuring the safety of our nation's food supply is one of our critical missions, and... my first priority is to protect American consumers."

Maggi detailed the corrective actions Brazil has taken and continues to take to address the food safety concerns, the USDA said, without providing specifics.

Brazil is the world's leading beef and poultry exporter. The US ban comes after a scandal in March when 21 meat processors in the South American country were accused by Brazilian police of adulterating bad quality meat and bribing inspectors.

That prompted some 20 countries -- including chief beef markets China and Hong Kong -- to suspend all Brazilian meat imports.

The bans caused havoc in the $13 billion a year industry, which employs some six million people, before being finally lifted.