US looks to defuse Qatar-Gulf row with counter-terror deal 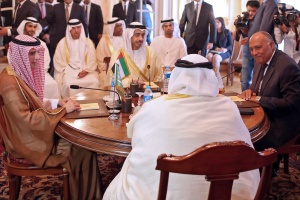 (AFP) - Qatar and the United States signed a deal Tuesday to combat "terrorism" as visiting US Secretary of State Rex Tillerson pursued efforts to resolve the Gulf diplomatic crisis.

In Qatar as part of a series of Gulf meetings, Tillerson also said Doha had been "reasonable" in the dispute, which has seen Saudi Arabia, the United Arab Emirates, Bahrain and Egypt cut ties with the emirate over accusations it supports extremism.

Tillerson is spending much of this week in the Gulf seeking to mediate in the rift among crucial US allies, and will meet foreign ministers of the four countries isolating Qatar in the Saudi city of Jeddah on Wednesday.

"The memorandum lays out a series of steps the two countries will take over the coming months and years to interrupt and disable terror financing flows and intensify counter-terrorism activities globally," Tillerson said at a joint press conference.

It also meant Qatar was "the first to respond" to US President Donald Trump's call at a summit in Riyadh earlier this year "to stop the funding of terrorism" -- suggesting such deals could be signed with the other Arab states as a step toward ending the crisis.

Sheikh Mohammed urged "the siege countries to join us in the future" by signing on to such deals.

But Tuesday's initiative met a dismissive reaction from the Arab countries that imposed sanctions on Qatar last month.

"This step is insufficient," said a joint statement published by Saudi state news agency SPA, adding that the four states would "carefully monitor the seriousness of Qatari authorities in combating all forms of financing, supporting and harbouring terrorism."

Commitments made by Qatari authorities "cannot be trusted," the statement added, citing previous agreements that have allegedly not been honoured.

While the State Department has warned the crisis could last months, Tillerson on Tuesday struck a moderately optimistic note.

"I'm hopeful we can make some progress to bring this to a point of resolution," he said after meeting Qatar's emir.

"Qatar has been quite clear in its positions and I think very reasonable and we want to talk now... (about) how do we take things forward."

Tillerson flew back to Kuwait -- the main mediator in the crisis and where he is based this week -- after the talks in Qatar.

Egypt announced the meeting with Tillerson in Jeddah on Wednesday, saying it "reflects the four countries' desire to enhance coordination and underscore their unity on ways to deal with Qatar in the future."

The diplomatic crisis is the worst to hit the region since the establishment of the Gulf Cooperation Council in 1981.

The four countries on June 5 announced sanctions, effective immediately, against Qatar over accusations Doha supported Islamist extremism and was too close to Iran.

They severed all diplomatic ties, suspended transport links with Doha and ordered all Qataris to return home within 14 days.

On June 22, the Saudi-led bloc issued a list of 13 demands which, if met, would end the sanctions, including closing broadcast giant Al-Jazeera, downgrading ties to Iran and shutting a Turkish military base in Doha.

Qatar refused to comply and has consistently denied accusations of ties to Islamist groups.

Tillerson's arrival in Doha was overshadowed by the publication of pre-existing confidential agreements between Qatar and other GCC states in which all sides had pledged to combat extremist funding and avoid interference in other states.

Publication of the accords, dated 2013 and 2014, caused both sides in the dispute to launch a fresh round of mutual accusations.

US broadcaster CNN aired leaked papers in which Saudi Arabia, Qatar and Kuwait -- and later Bahrain and the UAE -- had signed accords forbidding support for any opposition and hostile groups in their own nations, as well as in Egypt and Yemen.

A joint statement released by the Saudi-led bloc said the documents proved "beyond any doubt Qatar's failure to meet its commitments and its full violation of its pledges".

A statement from Doha's Government Communications Office said the "siege" was "a clear violation" of the GCC's charter and the agreements.

Tillerson's visit is the latest in a series by officials to the region, including UN diplomats and the foreign ministers of Germany and Britain.

Qatar is also home to the US military's largest air base in the region, Al-Udeid. Rival Bahrain houses the US Navy Fifth Fleet.