Qatar rivals look to next move in Cairo talks 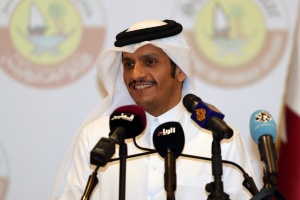 (AFP) - Arab states that have cut ties with Qatar meet in Cairo on Wednesday to discuss their next move in the Gulf diplomatic crisis, after Doha said their demands were impossible to meet.

The foreign ministers of Saudi Arabia, the United Arab Emirates, Bahrain and Egypt are holding the talks a month after they severed ties with Qatar, accusing Doha of supporting extremism.

Early on Wednesday, the Saudi foreign ministry said they had received Qatar's response to their demands -- which include Doha ending support for the Muslim Brotherhood and closing broadcaster Al-Jazeera -- and would respond "at the right time".

Saudi Arabia and its allies have not said what steps they could take next, but there are fears of a wider embargo that would hurt the Qatari economy, with ratings agency Moody's announcing it was changing Qatar's outlook to negative over the crisis.

The countries issued the 13-point list of demands on June 22, giving Qatar 10 days to respond. The deadline was extended by 48 hours on Sunday at the request of Kuwait, which is mediating in the crisis, and Qatar handed in the response on Monday.

The contents of the response have not been disclosed, but Qatari Foreign Minister Sheikh Mohammed bin Abdulrahman Al-Thani said Tuesday that the list of demands "is unrealistic and is not actionable".

"It's not about terrorism, it's talking about shutting down the freedom of speech," he said.

Qatar has denied any support for extremism and accused the countries of seeking to infringe on its sovereignty.

The other demands include Qatar downgrading ties with Iran -- Saudi Arabia's regional arch-rival -- and shutting down a Turkish military base in the emirate.

"The state of Qatar has adopted a very constructive attitude since the beginning of the crisis. We are trying to act mature and discuss the matter," Sheikh Mohammed said.

Riyadh and its supporters have severed air, sea and ground links with Qatar, cutting off vital routes for imports including food.

They also ordered Qatari citizens to leave their territories and took various steps against Qatari firms and financial institutions.

The crisis has raised concerns of growing instability in the region, home to some of the world's largest energy exporters and key Western allies who host US military bases.

Energy-rich Qatar has been defiant throughout the crisis, insisting it can weather action taken against it.

On Tuesday it even announced a major boost in planned natural gas output, with Qatar Petroleum saying it would increase production to 100 million tonnes a year by 2024, up 30 percent from current levels.

Qatar is the world's leading producer of liquefied natural gas. Its energy riches have transformed Qatar into one of the world's wealthiest countries, a major international investor and a regional player that will host the 2022 football World Cup.

Concern has been growing however, that a long crisis could have an economic impact.

Moody's said in a statement it was changing its outlook on Qatar to negative from stable, citing "the economic and financial risks arising from the ongoing dispute."

"The likelihood of a prolonged period of uncertainty extending into 2018 has increased and a quick resolution of the dispute is unlikely over the next few months," the agency said in a statement.

UAE Foreign Minister Sheikh Abdullah bin Zayed al-Nahyan said Tuesday it was "premature" to discuss what further action might be taken against Qatar.

Any measures that are taken will be "within the framework of international law", Sheikh Abdullah said.

"Any independent state has the right to take measures against any party," he added, urging Doha to listen to "the voice of reason and wisdom".