ICC to rule if S. Africa broke rules by not arresting Sudan's Bashir 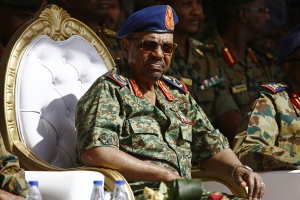 FILES) This file photo taken on April 09, 2017 shows Sudanese President Omar al-Bashir watching the joint Sudan and Saudi Arabia air force drill at the Marwa air base, near Meroe, some 350 kilometres north of Khartoum. War crimes judges will July 3 hand down an eagerly anticipated ruling on whether South Africa flouted international law by failing to arrest Sudan's Omar al-Bashir in 2015, wanted for genocide in Darfur. The landmark decision will serve as a blueprint for future cooperation between countries and the International Criminal Court, experts say and serve as a reminder the Hague-based tribunal can only function with the support of its member states and the backing of the UN Security Council. (ASHRAF SHAZLY / AFP)

(AFP) - War crimes judges will Thursday hand down an eagerly anticipated ruling on whether South Africa flouted international law by failing to arrest Sudanese President Omar al-Bashir in 2015, wanted for genocide in Darfur.

The landmark decision will serve as a blueprint for future cooperation between countries and the International Criminal Court, experts say.

It will also highlight that the tribunal based in The Hague can only function with the support of its member states and the backing of the UN Security Council.

A decision against South Africa "would send an important message that states cannot negotiate (their) legal obligations with the court," he told AFP.

Despite two international arrest warrants issued in 2009 and 2010, Bashir remains at large and in office amid a raging conflict in the western Sudanese region of Darfur.

The long-time ruler has denied the ICC's charges, including three accusations of genocide as well as war crimes and crimes against humanity.

The deadly conflict erupted in 2003 when ethnic minority groups took up arms against Bashir's Arab-dominated government, which launched a brutal counter-insurgency.

The UN Security Council asked the ICC in 2005 to probe the crimes in Darfur, where at least 300,000 people have been killed and 2.5 million displaced, according to UN figures.

Bashir continues to travel and Khartoum announced Monday he will visit Moscow for the first time in August following an invitation by Russian President Vladimir Putin.

Russia formally withdrew its signature in November from the ICC's founding Rome Statute, a treaty Moscow has never ratified.

Pretoria and the ICC became embroiled in a bitter tangle in 2015 when Bashir attended an African Union summit in Johannesburg.

Despite the arrest warrants, Bashir then flew home unhindered. It remains unclear whether he did so with the tacit approval of South African President Jacob Zuma's government.

At a landmark hearing in April, Pretoria disputed accusations by the ICC's prosecutors that it had broken its obligations to the very same tribunal it helped found in 2002.

Angry prosecutors stated Pretoria "had the ability to arrest and surrender Mr al-Bashir and it chose not to do so."

Pretoria's lawyers argued there "was no duty under international law on South Africa to arrest" Bashir, saying he enjoyed diplomatic immunity.

International law experts agree the ICC's judges are likely to find South Africa failed in its obligations to arrest and surrender Bashir.

But they added it was not a simple matter of rapping Pretoria over the knuckles.

"The manner and tone in which the decision is meted out will be of utmost importance," said international law expert Mark Kersten of the University of Toronto.

"It is possible, and what many hope, is that the decision will show some degree of understanding, and perhaps lenience towards South Africa and suggest that the matter continues to be debated at the appeals level," Kersten told AFP.

The ICC's judges could also refer the case to the court's Assembly of States Parties or the UN Security Council for further action.

Zuma last week reiterated South Africa's intentions to pull out of the ICC, saying it was "rectifying procedural challenges."

South Africa announced it had told the United Nations in October that it was pulling out of the ICC following the Bashir debacle.

But a South African court in February ordered Pretoria to reverse the decision, saying it was unconstitutional.

Kaajal Ramjathan-Keogh, executive director at the Southern Africa Litigation Centre, said it was far from certain judges will refer the case to the UN Security Council amid "certain sensitivities" about Pretoria's continued membership.

And if they do then "the effect, looking at the ICC's history, is going to be minimal," she added.

"At a minimum, the council should demonstrate its support for the work of my office by taking concrete action in response to decisions of non-compliance or non-cooperation referred to it by the court," Bensouda said.