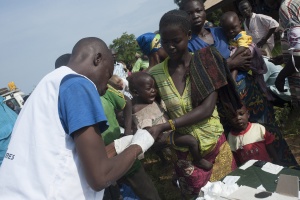 Members of the NGO "Doctors without border" distribute medicine against malaria during a campaign against the disease in the outskirts of Bambari, on July 27, 2014. As a recent ceasefire deal boosts prospects for peace in Central African Republic, a key medical aid group warned on Thursday that malaria was the leading killer in the impoverished landlocked country. Medecins Sans Frontieres (Doctors Without Borders) said it had seen a jump in cases in Central African Republic, where violence between Christian militia and Muslim rebels has killed thousands of people and forced a million from their homes. (AFP/PHOTO ANDONI LUBAKI)

(AFP) - A new malaria vaccine will be tested on a large scale in Kenya, Ghana and Malawi, the World Health Organization said Monday, with 360,000 children to be vaccinated between 2018 and 2020.

The injectable vaccine RTS,S could provide limited protection against a disease that killed 429,000 people worldwide in 2015, with 92 percent of victims in Africa and two-thirds of them children under five.

"The prospect of a malaria vaccine is great news. Information gathered in the pilot will help us make decisions on the wider use of this vaccine," said Dr Matshidiso Moeti, the WHO's regional director for Africa.

The vaccine should be used alongside other preventative measures such as bed nets, insecticides, repellants and anti-malarial drugs, the WHO said.

"Combined with existing malaria interventions, such a vaccine would have the potential to save tens of thousands of lives in Africa," Moeti said.

The vaccine, also known as Mosquirix, has been developed by the British pharmaceutical giant GlaxoSmithKline (GSK) in partnership with the PATH Malaria Vaccine Initiative, and the large-scale three-country pilot will test it on children aged five to 17 months.

The drug passed previous scientific testing -- including a phase three clinical trial between 2009 and 2014 -- and was approved for the pilot programme in 2015.

The aim of the trial is to assess the effectiveness of the vaccine as well the feasibility of its delivery to populations at risk as four successive doses must be given on a strict timetable.

The immunisation cycle is not in sync with routine childhood inoculations against diseases such as hepatitis, measles and meningitis, with injections required at five months, six months, seven months and two years.

Symptoms of malaria include fever, muscle pain and headache as well as vomiting and diarrhoea.

While RTS,S does not promise full protection against the mosquito-borne disease it is the most effective potential vaccine so far developed, reducing the number of malaria episodes by 40 percent in tests on 15,000 people over five years of clinical trials, and could therefore save hundreds of thousands of lives.

"It's an efficacy rate which is quite low, but given the amount of affected people, the impact will be huge," said Mary Hamel, who is coordinating the vaccine's implementation programme.

"There will be other vaccines and they'll be more efficient, but in the meantime, this will have a significant influence."

Kenya, Ghana and Malawi were selected for the trial because malaria rates are high and they have a long history of use of bed nets and other interventions.

The large-scale pilot is the latest step in decades of work seeking to eradicate malaria with the numbers dying falling nearly two-thirds since the turn of the century.