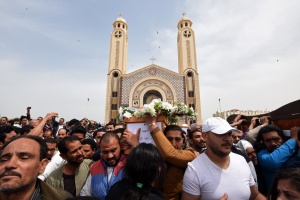 Mourners carry the coffin of a victim of the blast at the Coptic Christian Saint Mark's church in Alexandria the previous day during a funeral procession at the Monastery of Marmina in the city of Borg El-Arab, east of Alexandria on April 10, 2017. Egypt prepared to impose a state of emergency after jihadist bombings killed dozens at two churches in the deadliest attacks in recent memory on the country's Coptic Christian minority.(MOHAMED EL-SHAHED / AFP)

(AFP) - Hundreds gathered Monday to mourn 45 Egyptian Christians killed in jihadist bombings just a week before Easter, after Cairo declared a state of emergency following the attacks on two churches.

The Islamic State group said it was behind the twin bombings that targeted Palm Sunday services at churches in the cities of Tanta and Alexandria, and threatened further attacks against Egypt's Christian minority.

The second struck outside Saint Mark's church in Alexandria, killing 17 people after a suicide bomber was prevented from entering the building.

The violence comes ahead of Catholic Pope Francis's first trip to Egypt later this month, which a Vatican official said will proceed as planned on April 28 and 29 despite the attacks.

Mourners filled the Saint Mina monastery west of Alexandria Monday as they bade farewell to the victims of the deadliest attacks in recent memory on Egypt's Coptic Christian minority.

The victims' wooden coffins were placed near the altar amid applause as mourners saluted their "martyrs".

"I am a Christian till judgment day," they shouted.

In Alexandria on Monday, investigators combed for clues and took pictures of the debris produced by the blast.

A handful of black-clad women showed their identification papers to guards before being allowed to enter the church.

In addition to the death toll of 45 from the two explosions, scores more people were wounded.

In Cairo, the cabinet said it has approved President Abdel Fattah al-Sisi's decision to declare a three-month state of emergency, which was published on Monday in the official gazette.

Constitutionally, it still has to be presented to and approved by parliament within seven days, but this is a formality given the number of pro-Sisi delegates.

In another development, the interior ministry said on Monday seven people thought to be planning to attack Christians have been killed in a gunfight in Assiut province.

Three of the seven dead were allegedly planning to attack a monastery in Durunka village and to target Christians in both Assiut and Sohag provinces, the ministry said.

It did not say when the firefight took place.

"The President also expressed his confidence in President Al Sisi's commitment to protect Christians and all Egyptians," the White House said on Monday.

In a defiant speech on Sunday, Sisi warned that the war against jihadists would be "long and painful" after he ordered the army to protect "vital infrastructure" and boost security along Egypt's borders.

The cabinet on Monday announced compensation of 100,000 pounds ($5,500, 5,200 euros) for each death, and a monthly pension of 1,500 pounds, while still evaluating "appropriate compensation" for the injured.

Lawmakers said the state of emergency -- Egypt's first since widespread unrest in 2013 -- would help the country face down a jihadist insurgency.

IS has staged deadly attacks in the Sinai Peninsula against security forces.

Copts, who make up about one tenth of Egypt's population of more than 92 million, have been targeted several times in recent months.

Jihadists groups such as IS, and Islamists accuse Copts of supporting the military overthrow of Islamist president Mohamed Morsi in 2013, which ushered in a deadly crackdown on his supporters.

In December, a suicide bombing claimed by IS killed 29 worshippers in a Cairo church, and the jihadist group later released a video threatening Egypt's Christians.

Attacks in the Sinai, including the murder of a Copt in the city of El Arish whose house was also torched, prompted some Coptic families to flee.

Sunday's Alexandria bombing was especially concerning for the Copts, as Pope Tawadros II had led the Palm Sunday service at Saint Mark's but left before the explosion.

Sisi has defended the performance of his security forces and accused jihadists of trying to divide Egyptian society by attacking vulnerable minorities.

However, rights groups accuse the former army chief of crushing even peaceful opposition to his rule.

The pro-state daily paper Al-Bawaba said on its website that its Monday edition, which was critical of security provisions, had been banned from publication.