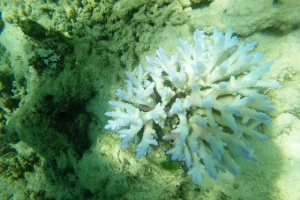 (Seychelles News Agency) - The coral reefs of Seychelles are in grave danger due to the damage sustained during last year's warm El Niño and the general effect of climate change, says a local marine biologist.

Jude Bijoux told SNA that, “The current live coral cover in sites that have been monitored is now approximately 3 to 5 percent and very much at risk due to the warming effect of the climate change."

The level of coral bleaching currently is similar to the bleaching catastrophe which happened in 1998, where up to 97 percent of corals in some areas bleached and caused many reefs around the islands to collapse into rubble.

Bleached coral continues to live, but without its colourful symbiotic algae it loses most of its food source and becomes extremely vulnerable to disease, predators and invasive organisms like seaweed and sponges. If the water temperature remains high, the coral will die.

Bijoux said, “Currently, the worrying trend is if the next bleaching event happens sooner than expected, that is before 17 years, it would not have sufficient time to bounce back to pre-bleaching levels.”

The target is to ensure that live coral remain at levels that were there before the bleaching of 1998.

“If the reefs do not get sufficient time to recover, they will become smaller and eventually upset the ecosystem as many underwater species depend on the coral reefs for food and shelter,” said Bijoux.

For an island state like Seychelles, coral reefs are extremely important as they contribute to the two most important sectors of the country’s economy -- tourism and fisheries.

“One way that humans can protect the reef is by ensuring that the water that runs off into the sea are of better quality with very little or no nutrients. Nutrients promote the growth of algae, which grows faster that the coral reefs,” explained Bijoux.

Nature Seychelles, a local non-governmental organisation, started the country’s first scientific coral restoration program seven years ago to reverse the trend. Taking corals that had survived the 1998 bleaching, the organisation grew over 45,000 fragment of corals in underwater nurseries and planted a degraded area in the Cousin Island special Reserve covering the size of a football field.

The Seychelles National Parks Authority (SNPA) is currently undertaking another coral nursery project since the end of 2015 off Curieuse Island to try and restore the reefs.

Bijoux said that there are reefs which have degraded and without manual help, they will not recover.

In February, as part of the Valentine’s Day activities, guests at the Four Seasons Resort Seychelles had to prepare a rescued coral fragment from the reef bay and attach it to a heart-shaped metal frame, which was then transplanted into the nursery for full recovery. The fragment will then be transplanted back to the reef in its natural habitat.

Looking to the future, Shah told SNA that “We cannot turn back the clock and what is gone is gone. We have to now design new types of reef – designer reefs as we call them.

The Nature Seychelles’ Reef Rescuers’ team who are in the water all the time has recently discovered “super corals” that have not bleached at all.

“We are now growing 3,000 fragments of these in our nurseries so we can design and plant new, climate-proofed coral reefs,” added Shah.

In the Indian Ocean, Seychelles, a group of 115 islands, is the most vulnerable as it is much closer to the equator and thus the water is warmer than neighboring countries of Reunion and Mauritius.