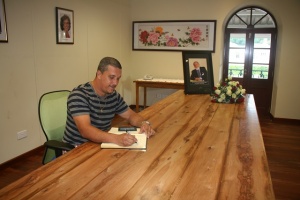 (Seychelles News Agency) - Mourners in Seychelles have been paying tribute and expressing their sympathies to former President James Mancham in a book of condolences made available to residents on the nation's three main islands, Mahe, Praslin and La Digue.

The mayor’s office in Victoria was busy on Wednesday morning as people queued up to write their messages of condolences to Mancham, who died on Sunday at his residence.

Relatives, friends, acquaintances, colleagues and former employees were among those who paid tribute to what most of them described as a great man.

One message read, “I salute your tireless devotion, loyalty and love for your country.” Another wrote: “A monumental loss of a great patriot, a kind-hearted, refined and respectable gentleman whose love for Seychelles and its culture was exemplary.”

One message quoted one of the former president's favourite songs, Una Paloma Blanca by Jonathan King, played at all his political rallies following his return to Seychelles from exile.

“'I’m like a bird in the sky, No one can take my freedom away.’ Ton Jim is now the ‘bird’ in the sky. Whether Seychellois now have the courage to follow the ‘new day’ and follow the sun remains to be seen,” the person wrote.

Mancham – the founding president of Seychelles, a group of 115 islands in the western Indian Ocean - is remembered for his role ahead of the country’s independence in 1976 and his active role in politics after the introduction of the multi-party system in 1991.

Mancham is also remembered for his campaign for unity and national reconciliation.

One message read, “You have left today with no regret of yours. You were a man of principle to your philosophy. It’s only now that you are gone, that your people realised this.”

One reader’s message was an excerpt of one of Mancham’s sayings.

“Along life’s sandy shores, Let me leave behind my humble footprints, Until the tide will come in, To wash them away.”

Mancham, 77, who died in his sleep at his residence at Glacis-Sur-Mer, will lie in state at the Palais de Sports, a sports complex on the outskirts of Victoria, Seychelles’ capital on Thursday, followed by a private ceremony at State House.

The funeral service will be held at the Cathedral of the Immaculate Conception in Victoria. Mancham's body will be laid to rest in the State House Cemetery.