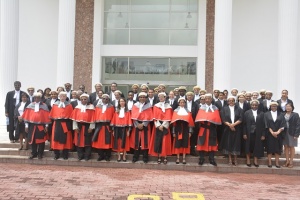 The court's theme this year -- 'Unity in Diversity’ -- acknowledges the principles adopted by “we the people” in the country’s Constitution.(Jude Morel, Seychelles News Agency)

(Seychelles News Agency) - Seychelles' Supreme Court re-opened on Tuesday after a six-week break, with a special call for unity by the chief justice, Mathilda Twomey.

Twomey said the court's theme this year -- 'Unity in Diversity’ -- acknowledges the principles adopted by “we the people” in the country’s Constitution.

Seychelles, an archipelago in the western Indian Ocean, has adopted a Constitution, “which explicitly reminds us of the fact that we are descendants of different races who have learnt to live together,” said the chief justice.

The re-opening of the Court started with the traditional mass at the Cathedral of the Immaculate Conception, followed by a procession led by the chief justice, through the island’s capital, Victoria.

Members of the judiciary then proceeded to Palais de Justice at Ile Du Port, on the outskirts of Victoria.

The Chief Justice added that: “We need to ensure that we are able to put our differences aside, play to our strengths and work together because we have hard work to do.”Twomey said the theme calls on everyone “to reaffirm our commitment to valuing the dignity of individual persons within the structure of the whole. We seek unity, not uniformity. We seek reconciliation, not retaliation."

On the work planned for 2017, Twomey said the judiciary will release its strategic plan for the next three years. The document is the result of a consultative process that has involved all branches and department of the judiciary.

“We are using this to develop a strategic plan that will be rolled out from now until 2020 and will put emphasis on driving the judiciary towards its goal to be a centre of academic excellence,” said Twomey.

This year the judiciary will also take a fresh look at the rules and procedures internally and at the Seychelles Code of Civil Procedure, the Courts Act and all of the various courts and tribunal rules. Court fees and costs will also be looked at.

Twomey said that in April, two Commonwealth Judges, Crawford Mckee and Dan Akiiki-Kiiza, will be leaving after their tenure.

When speaking on the review for 2016, the chief justice said the judiciary heard the highest number of cases compared to previous years, thus reducing the backlog.

Last year’s focus was on improving access to justice for all and Twomey said the aim was to take a fresh look at how the judiciary works and how it could ensure that each person in Seychelles could get into court and get real justice within the rules of the law.

In 2016 there was also an increase in the number of Magistrates courts as well as the re-opening of the courtroom on La Digue, the third most populated island, and in the southern district of Anse Royale.

The use of video link facilities for certain preliminary hearings directly between the prisons and the courts was also introduced.

At the ceremony, Twomey also paid tribute to former President James Mancham, who passed away on Sunday, and called for a minute of silence in his honour.

She said Mancham, who was a member of the legal profession, an ardent fighter for human rights and a devotee to national reconciliation, was an asset to Seychelles.

“His fingerprint on the legal system of Seychelles will not fade, and for his contribution, we are truly grateful”, she added.