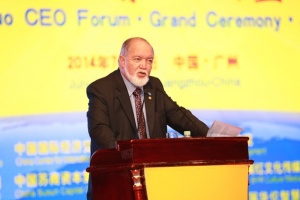 (Seychelles News Agency) - Seychelles' first president, James Mancham, who passed away on Sunday, will receive a state funeral on Thursday, authorities have announced.

Mancham, 77, who died in his sleep at his residence at Glacis-Sur-Mer, will lie in state at the Palais de Sports, a sports complex on the outskirts of Victoria, Seychelles’ capital, followed by a private ceremony at State House.

The funeral service will be held at the Cathedral of the Immaculate Conception in Victoria. Mancham's body will be laid to rest in the State House Cemetery.

Since the announcement of Mancham’s death on Sunday, messages of condolences have poured in.

Former President James Michel has expressed his deepest sorrow and regret on the passing away of the founding President of Seychelles, whom he called ‘Jimmy’ in a letter to Mancham’s wife, Catherine.

“Jimmy was a world statesman, a philosopher, a writer and a poet whose commitment and tireless contribution to the promotion of world peace, progress and reconciliation found resonance on the international scene and in Seychelles,” said Michel.

He added that Mancham was a pillar of the contemporary history of Seychelles, a group of 115 islands in the western Indian Ocean, and a central figure of the country’s return to multi-party democracy.

“He was a true apostle of peace, national unity and reconciliation, and his achievements, vision and endeavours in that sense will remain his enduring legacy,” Michel said.

The leader of the opposition in the National Assembly, Wavel Ramkalawan, in his message, said Seychelles is saying goodbye to a leader who helped shape our modern history.

Ramkalawan said Mancham will be respected as the man who led Seychelles through the important phases to full independence.

“I respect him as the first president of our republic, and I am sure that had he been given the chance to serve out his term of office, our country would have taken a different road where unity, peace and democracy would have been the norms,” said  Ramkalawan.

The opposition leader in the National Assembly proposed that in honour and recognition to his campaign towards National Reconciliation, that the ‘5th June Avenue’ be renamed ‘Sir James Mancham Avenue’.

SNA spoke to friends and colleagues of Mancham.

Georges Bibi told SNA he knew Mancham through his father, Uranus, whom he said was one of Mancham’s advisors at the start of his political career in the 1960s.

Bibi said although his family members were ardent supporters of the Democratic Party (DP), he only got into politics in 1992, when Mancham returned from exile. He was present at the airport to welcome back Mancham and was encouraged to join DP.

“As a politician he never allowed his emotion to cloud his vision, reason or decision and I think that was one of his biggest traits which I would think helped shaped him into a great leader, who has received worldwide recognition,” said Bibi.

Bibi’s most precious memory was when Mancham chose him to form part of the Constitutional Commission in 1992-1993 with the mandate of drafting the constitution of the third republic.

Mancham also chose Bibi to represent DP in the National Assembly in 1993. Bibi was the only member of the party in 1998 to occupy a seat in the assembly.

“The fact that he chose me among all the other members, really marked me. He saw my hidden abilities, so he gave me that opening as he believed in me”, said Bibi.

A friend of more than 40 years, Paul Chow, told SNA he met Mancham in 1968 when he was only 16 -- seeking a job at the Seychelles Weekly newspaper, of which Mancham was the publisher.

Chow, who took to social media on Sunday to relate some of his best memories, said Mancham asked him to write some articles "and we will see”.

“This moment, in many respects, was the start of my own life’s journey that would develop into a bond of friendship with Jimmy Mancham that would last more than 40 years,” he wrote.

Chow recalled another memorable moment in 1972, while studying in Reunion Island, a French department in the Indian Ocean, when he received a surprise visit from Mancham, who shared what he considered to be probably the most difficult decision Mancham had to make in his political life.

“He told me that he had more or less been told bluntly by the British establishment that Great Britain would never countenance granting integration status to Seychelles.’

Chow added that Mancham said, “Why wait until Rene wins an election so he could declare independence. It is better that we do it first. The new Seychelles would need the best and the brightest to return home and serve the new nation.”

In December 1991, Chow said he returned to Seychelles from exile in England at the request of Mancham to assess the political situation and worked alongside him to reorganize the party.

“I will remember him as the kindest person, he would never harm anyone, never had any bad feelings for anyone and he always forgave everybody,” said Chow, who headed DP between 2006-2008.

A former supporter of the Democratic Party, Annette Desaubin, 72, told SNA that Mancham will always be remembered for all the good he did for the people of Seychelles.

“My husband and I supported him in the 1960s. He was all for developing Seychelles and opening the islands to the outside world. The airport was built during his time as chief minister,” she said.

Desaubin, who was very emotional while speaking to SNA, said although Mancham was deposed in a coup d’état, her family remained his ardent supporters and was happy to welcome him back to Seychelles in 1992.

“I am very sad, we have lost a great man and he will forever remain in our hearts”, she said.

“He was a good friend, kind-hearted, friendly and a calm individual,” said Mellon.

This was echoed by Holden Pierre, DP elected member for the legislative council in 1970 and 1974 for the South Mahe.

“Mancham was a very nice and kind man. He never hurt anybody, he never killed anybody or put anybody in jail," said Pierre.

Mancham leaves behind his wife and three children.