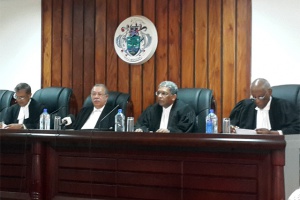 The Court of Appeal on Friday dismissed appeals lodged by the Seychelles National Party Leader, Wavel Ramkalawan, seeking to overturn the Constitutional Court’s ruling delivered in May that rejected his petitions challenging results of the polls.(Seychelles News Agency)

The top court dismissed appeals lodged by the Seychelles National Party Leader, Wavel Ramkalawan, seeking to overturn the Constitutional Court’s ruling delivered in May that rejected his petitions challenging results of the polls.

The case followed a historical run-off contested by Ramkalawan and the then-President James Michel, leader of the ruling Parti Lepep.

Ramkalawan had petitioned the court to rule that none of the two candidates had obtained the absolute majority of the votes cast, and to nullify the results on the basis of irregularities committed and non-compliance to the electoral laws. Both petitions were directed at the Electoral Commission, President James Michel and the Attorney General.

In its ruling, the Court of Appeal addressed the interpretation of the terms “votes cast” and “valid votes cast” to determine the of an election.

In the verdict read by Judge Satyabhooshun Gupt Domah the court said that for the determination of the over 50 percent threshold, votes received by the respective candidate should be counted against valid votes cast and not against the number of ballots that found their way into the ballot box.

“It we adopted the latter meaning we would be, as a court of law, engaging ourselves in judicial legislation,” said Domah.

“The appeal has no merit and is dismissed,” he added.

In Friday’s decision, the Court of Appeal reiterated its judgement in favour of the Popular Democratic Movement in 2011 on the issue of votes cast. The opposition party had contested the use of the words votes cast to determine the allocation of proportional seats in the assembly.

The second appeal relating to the election petition on which the court ruled on Friday concerned a petition asking the court to nullify the results of the election on the basis of irregularities committed and non-compliance to the electoral laws.

Claims of irregularities made by the petitioner, Ramkalawan, included statements made by alleged agents of the former President Michel aimed at enticing voters.

Judge Domah said the Constitutional Court had not erred in applying the Seychelles law “as to agency for the determination of the alleged agents and Respondent No 2 [former president Michel] on whether or not the latter had committed illegal acts.”

“The few illegal practices that were not found proved were not by themselves or by other attendant circumstances of such a nature as to go to the very root of the election so as to render it void,” he added.

Judge Domah said that the burden of proof had been properly applied in the case.

Lawyer Annette Georges, who was representing Ramkalawan’s lawyer, Bernard Georges who could not be present in court, said she would have to read the whole judgement to have a good understanding of the Court of Appeal’s decision.

“It may be that although we lost the appeal, when you read the ruling you come to realize that some things were in our favour and that of the country because what’s important is that we are seeking free, fair elections. So I am disappointed with what I’ve heard in court until I can read the whole judgment,” said Georges.

The lawyer representing the Electoral Commission, Samantha Aglae said she was satisfied with the ruling.

Friday’s sitting of the Court of Appeal which saw judgments delivered in 12 cases was the last for this year.