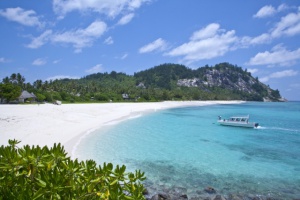 The popularity of the 115-island archipelago among honeymooners was given a boost this weekend, as Seychelles was declared the world’s leading honeymoon destination. This was revealed at the World Travel Awards grand final ceremony.

The award presentation was held on Friday evening in the neighbouring Indian Ocean island of Maldives, in the presence of some 250 hospitality leaders from across the globe.

Seychelles emerged as the world’s best in the honeymoon destination category, ahead of 10 other nominees including neighbouring Mauritius, which has won the same award over the past four years.

“For me when you mention Seychelles, it’s synonymous to romance, weddings and honeymoon. So the award reiterates the message that is always stressed on during our marketing events, that Seychelles is one of the world’s best honeymoon destinations,” Francistold told  SNA, adding that the island nation’s honeymoon market hails from across the globe.

Francis said: “Honeymooners to Seychelles  hail from our main markets as well as from our emerging markets like India for example, where a lot of the visitors from there are honeymooners.”

The tourism board’s CEO said this shows that Seychelles has established a niche market, adding that while there is not much need to market the islands as a honeymoon destination, there is a need to ensure the Seychelles continues to remain visible.

In a press statement issued on Friday the World Travel Awards President Graham Cooke said Friday’s award ceremony recognised some of the best of international tourism.

“More than 1.1 million votes were cast during our Grand Tour 2016, both from members of the public and from within the hospitality industry, and these voices have been heard,” said Cooke.

The World Travel Awards, established in 1993, recognise the very best travel organisations in the world through a global vote by travel professionals.

Awards are presented for excellence in providing services in different categories of the world’s travel and tourism industry including air services, car rental services, spas, travel agencies and tour operators, hotels and resorts among others.

The awards are first given on a regional basis, with the winners qualifying for the grand final of the World Travel Award.

Tourism is the mainstay of the Seychelles economy, and the accolade comes at the same time that the island nation on Friday surpassed the 278,853 total tourism arrival figure recorded in 2015.

Francis noted that the tourism authorities believe the country is well on track to end this year with 300,000 visitor arrivals, which would represent a 10 percent growth compared to the previous year.

“We have performed extremely well across all of our main markets. For example France [the tourism main market] we achieved a record of 40,000 visitors which was only achieved four years ago” she added.

Francis has attributed the achievement to the collaborative effort of the tourism authorities as well as trade partners including airlines and destination management companies.