Seychelles and Madagascar to set up partnership in fishing and agriculture 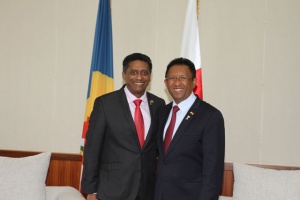 President Danny Faure (left) and President Hery Rajaonarimampianiana during their meeting on the sidelines of the 16th summit of French-speaking countries. (State House)

(Seychelles News Agency) - The Seychelles’ President Danny Faure and his counterpart from Madagascar Hery Rajaonarimampianiana have pledged to set up a partnership in the areas of fishing and agriculture during a meeting on the sidelines of the 16th Summit of French-speaking countries, State House said.

A delegation from Seychelles is expected to visit Madagascar soon. Fishing is the second most important contributor to the Seychelles economy.

During their discussions, the two heads of state addressed the prospects for strengthening relations between Madagascar and Seychelles, an 115-island archipelago in the western Indian Ocean.

According to the statement, Faure and Rajaonarimampianiana expressed their satisfaction with the quality of the friendship and cooperation their countries have within the Indian Ocean Commission (IOC).

The issue of maritime security was also discussed and President Faure said, “On this subject, our two countries share a common cause to ensure effective monitoring of both our exclusive economic zones and all the space in the South-West of the Indian Ocean."

It was agreed by the two heads of state that a general agreement is to be set up to oversee cooperation in these areas and it will be accompanied by a joint committee.

Both Seychelles and Madagascar are also concerned about security, peace, sustainable development, and the fight against climate change.

Faure and Rajaonarimampianiana have welcomed the direct air links between the two countries which they say is critical for the development of trade, tourism and other sectors.

The Seychelles’ President Danny Faure also met with the President of the Comoros, Azali Assoumani where they discussed issues linked to climate change, maritime safety, the promotion of the blue economy and defending the cause of small island states.

Faure and Assoumani have agreed to ensure the implementation of the agreements already signed between the two countries in the areas of fishing and tourism. They said these agreements are important levers that offer a huge potential regarding socio-economic benefits to their populations.

As a priority action, the President of the Comoros has requested the support of Seychelles for the development of their tourism industry.