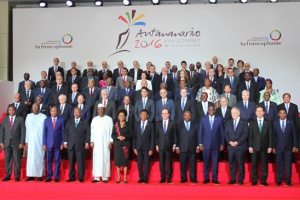 With regards to climate change, the Seychellois head of state recalled the recent environment summit held on Marrakesh, Morocco that has outlined a roadmap for global climate action by all parties, aimed at achieving the objective of the Paris Agreement.

President Faure has invited La Francophonie to be actively involved in the fight against climate change. He also said that Seychelles is hoping La Francophonie will be able to support all of its aspirations, with 2018 being an important year for the involvement of both state and non-state actors, when it comes to funding to support climate action.

The 16th summit of French-speaking countries was held under the theme: “Shared growth and responsible development: conditions for stability around the world and within La Francophonie.”

Commenting on the theme, President Faure said this was “in total coherence with the Seychelles' national policy, which places people at the centre of all development.”

According to the State House statement, the Seychellois president also highlighted the importance of the sustainable tourism project for small island states which is supported by La Francophonie. And he also welcomed the organization’s initiative to promote entrepreneurship among women and youths allowing them to do business, be innovative and become the architects of their own lives.”

Ahead of the summit, President Faure had the opportunity to visit the Seychelles’ stand at an exhibition showcasing young entrepreneurs from the Indian Ocean region. The Chief executive of the Seychelles National Council Alvin Laurence was leading the archipelago’s representatives -- Daniel Dina doing metal works, and Vivienne Dodin in massage and care services – at the event.

The Salon was organised by the Conference of Ministers of Youth and Sports from French Speaking countries (CONFEJES). It brought together young entrepreneurs of the Indian Ocean and the Caribbean and promoters from six countries -- the Comoros, Djibouti, Haiti, Madagascar, Mauritius and Seychelles.

President Faure has congratulated the two young Seychellois entrepreneurs for their creative and innovative works and wished them success in their business ventures.

The 16th summit of French Speaking countries was the first to be held in Madagascar, and the second to take place in the Indian Ocean region after the one held in Mauritius, in 1993.

On the sidelines of the summit, President Faure also held bilateral talks with the Prime Minister of Mauritius Anerood Jugnauth.

On economic ties, Prime Minister Jugnauth invited the Seychellois head of state to the Economic Forum to be held in Mauritius on March 27 next year, under the aegis of the African Union. The Mauritian Prime Minister has also invited President Faure for an official visit to Mauritius in 2017.

The statement adds that health and social issues including substance abuse, which is currently affecting both countries, were also discussed.

“Mauritius has agreed to share its expertise and experience with Seychelles and help support the country’s rehabilitation programmes,” the statement added. “Both leaders also reviewed the cooperation in the health sector with particular emphasis on the recruitment of Mauritian doctors for Seychelles.”

President Faure has also pledged Seychelles’ support to Mauritius in its efforts to reclaim the sovereignty of Chagos from the United Kingdom.

The majority of around 2,000 Chagossians who were forcibly evicted from the Chagos archipelago in the Indian Ocean when the UK leased the main island Diego Garcia to the U.S. to use as a military base in 1960, were exiled to Mauritius. Some 250 of them were deported to Mahé, the main island of Seychelles, between 1967 and 1973, when the country was still a British colony.

A recent decision of the British government decided against the resettlement of the Chagossian people to their island home.