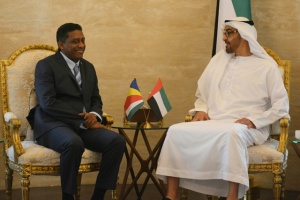 (Seychelles News Agency) - Seychelles and Abu Dhabi have discussed increasing cooperation in the areas of education, health, housing and renewable energy during the President's visit there, a State House statement said on Wednesday.

The Seychellois head of state Danny Faure is back in office following a working visit in Abu Dhabi, in the United Arab Emirates.

The visit was at the invitation of Sheikh Mohammed bin Zayed Al Nahyan, Crown Prince of Abu Dhabi and Deputy Supreme Commander of the UAE Armed Forces.

During their discussions held on Tuesday, President Faure expressed appreciation for the UAE’s support to Seychelles’ socioeconomic advancement over the years, adding that the two countries “are bound by very special ties of fraternal friendship based on mutual respect and understanding.”

With regards to ongoing partnerships in education, health, housing and renewable energy, the State House statement said that President Faure and Sheikh Mohammed, agreed on the need to work more closely to bring further development to these four sectors.

Housing and energy are already among sectors that have benefitted from financial assistance from the Abu Dhabi Fund for Development (ADFD), which first became involved in financing development projects in the Seychelles in 1979.

“They also agreed on the need for further cooperation and innovation in the renewable energy sector especially with regard to solar energy in order to reduce Seychelles’ expenditure on non-renewable energy consumption,” the statement reads.

President Faure said that Seychelles is more encouraged than ever by prospects of enhanced partnership with the UAE.

“The UAE’s ambitious vision for the future has very rapidly transformed it into a nation that serves as an example to be followed, largely due to the dedicated commitment of its government and its populace to furthering its progress and development. This value is mirrored in the great importance that the Government of Seychelles attaches to people-centered development,” President Faure concluded in the statement.