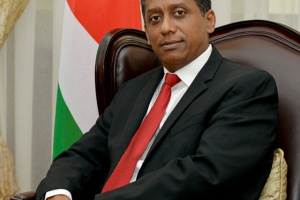 (Seychelles News Agency) - The President of Seychelles, Danny Faure, is travelling to Marrakesh, Morocco this weekend to join other world leaders at the UN’s 22nd Conference on Climate Change (COP22).

It was during a visit to Seychelles in July this year that Morocco’s Minister for Foreign Affairs and Cooperation Salaheddine Mezouar presented an invitation for the island nation to attend the gathering.

During the Cop 21 meeting in France’s capital city, Paris, last December, the 195 participating countries adopted the first global agreement on climate change -- a binding treaty that aims to limit global warming to below 2 ° C.

The Seychellois participants met ahead of the event -- earlier in November -- to discuss Seychelles' climate change position vis-à-vis the conference. According to an article published in Seychelles Nation, it was also an opportunity for them to meet with stakeholders and hear any proposals they may wish to include in the Small Island Developing States agenda. According the Seychelles Nation article, Seychelles will have a 10-man delegation led by President Faure at the Morocco meeting.

Seychelles, a 115-island archipelago in the western Indian Ocean is also being represented among five youths from the region.

According to the Cop22 website, the meeting is expected to focus “on action items in order to achieve the priorities of The Paris Agreement, especially related to adaptation, transparency, technology transfer, mitigation, capacity building and loss and damages.”

Salaheddine Mezouar, President of COP22, has described the gathering as an “opportunity to make the voices of the most vulnerable countries to climate change heard, in particular African countries and island states. It is urgent to act on these issues linked to stability and security.”

The Paris Agreement is the first legally binding treaty aimed at combatting climate change. The agreement entered into force on November 4, when it had been ratified by at least 97 of the 197 parties of the United Nations Framework Convention on Climate Change.

The newly elected U.S. President, Donald Trump, has threatened to withdraw the United States from the treaty.