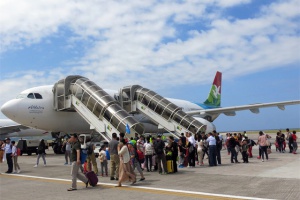 File Photo: Tourists landing in Seychelles at the international airport. Tourism is one of the main factors the IMF said is contributing to Seychelles' good economic performance and positive growth. (Patrick Valmont, Air Seychelles)

(Seychelles News Agency) - Economic growth for 2016 in Seychelles is projected to reach around 4.5 percent, an International Monetary Fund official said this week, a reflection of "vibrant tourist arrivals" and expanding credit to the private sector.

Wendell Samuel led an IMF team that came to conduct the fourth and fifth reviews under the Extended Fund Facility arrangement with Seychelles. “Macroeconomic performance has been robust in 2016,” Samuel said, adding that inflation has been negative since the beginning of 2016 largely due to the low prices of commodities and stable exchange rates.

Separately, the Bretton Woods institution has predicted the country’s primary fiscal surplus to reach 3 percent of GDP [gross domestic product] this year due to the country’s good economic performance. This is in spite of the impact of the various financial initiatives announced in the State of the Nation Address in February, including income tax cuts and increases in pensions and the minimum wage.

Looking on to 2017, Samuel said the growth outlook remains positive, largely due to foreign direct investment in the tourism sector.

He said that although a recovery in the national commodity prices could have some negative impacts on the balance of payments, “the country’s international reserves coverage is expected to remain adequate, anchored by strong macroeconomic policies.”

The IMF mission chief however cautioned that there might be downside risks to the outlook largely due to the external factors. “Weaker than expected global growth can dampen tourism performance,” he said.

Tourism is one of the two main sectors that the Seychelles' economy relies on for foreign exchange earnings. So far, over 240,000 visitors have disembarked in Seychelles in 2016, representing a 9 percent increase compared to last year.

During its mission in Seychelles, the IMF team met and held discussions with government officials including the new Seychelles President Danny Faure, the opposition and other key stakeholders including the private sector.

Poverty reduction was another topic discussed during the meetings. In a report made public in late 2015, the Seychelles National Bureau of Statistics said a poverty and equality survey carried out in 2013 placed the poverty line estimate at SCR 3,945 (around $300) per adult per month. The proportion of the population below the poverty line was then estimated at 39 percent.

The IMF mission said that during discussions with the authorities, the need for more progress on poverty reduction was evoked to ensure that benefits of economic growth are shared by all.

“However this should be done in a manner that safeguards macroeconomic stability and preserve the gains achieved through the bold reforms implemented since the 2008 crisis,” said Samuel.

He also called on Seychelles’ Central Bank to remain vigilant to the potential impact on inflation of domestic demand pressures, stemming from the State of the Nation Address initiatives.

The outgoing Minister for Finance, Trade and the Blue Economy now appointed Minister for Health and Social Affairs Jean Paul Adam, present at Monday’s press conference, said the 2015 report on poverty and equality estimates highlighted some deficiencies in the basic income needed by a household.

Adam said Seychelles should reinforce the work being done to reduce poverty and address concerns of those that are more vulnerable in the society by focusing on social justice and redistribution of wealth. He noted that this should be done in a responsible manner, in line with the macroeconomic measures.

He added that the recent increase in pension and minimum wage are among measures taken to address the issue of revenue while adding that a progressive income tax system scheduled to come into force into 2017 is one of the main measures being taken to reduce the vulnerabilities of Seychellois families.

Both Minister Adam and the Governor of the Central Bank of Seychelles Caroline Abel welcomed the IMF’s report and said the country’s economy is more resilient now as a result of the various reforms implemented so far and which the country continues to implement.

“For 2016 we are on track to reaching the [primary fiscal surplus of] 3 percent and this is also our target for our 2017 budget,” Adam said. He added that Seychelles was confident of maintaining this discipline and stability in the coming year “to allow us to achieve our target of reducing our debt to GDP ratio to below 50 percent by 2020.”

Abel said since the last visit of an IMF mission to Seychelles in March, the reserve bank has maintained a strict monetary policy despite the fiscal initiatives announced by the government, to limit pressure on demands for foreign exchange.

Seychelles embarked on an IMF-backed economic reform programme in 2008, prompted by a default in the repayment of its debts. At the time the total public debt that stood at 151 percent of GDP, with the external public debt representing almost 95 percent of GDP -- or $808 million.

A five-year reform programme which started in October 2008 ended in October 2013 and was followed by a new generation of reforms – the current three year Extended Fund Facility -- approved by the IMF in June 2014.