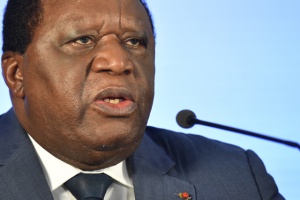 Ivory Coast's president of the independant electoral commissions Youssouf Bakayoko speaks during a press conference on November 1, 2016 at the electoral commission headquarters in Abidjan, to announce the provisional approval of the new constitutional referendum. (Sia KAMBOU/AFP)

President Alassane Ouattara said the changes were necessary to help end years of instability linked to disputes over national identity while critics labelled the vote an attempt to line up a successor for when his term ends in 2020.

The "Yes" camp won 93 percent of votes cast in Sunday's constitutional referendum, but most eligible voters stayed at home, following the opposition call to boycott, with the official turnout rate put at just over 42 percent.

An opposition leader quickly dismissed the official results as "fake".

The package, put to the country's 6.3 million voters, also includes creating a post of vice president as well as a senate, a third of whom would be appointed by the head of state.

The measures have alarmed opposition leaders and prompted accusations that Ouattara is trying to instal a sympathetic successor.

"More than 90 percent... of Ivorians have understood the need to turn the page on our shameful ways," Joel N’Guessan Joel N'Guessan, spokesman for Ouattara's Rally of Republicans Party (RDR), told AFP.

The 42 percent turnout rate was "honourable," he added.

The official numbers "do not match reality. We all witnessed an electoral desert (on Sunday)," he added, referring to the turnout.

He spoke of cases of "corruption and ballot-stuffing", insisting that the real turnout rate was no higher than 10 percent.

"The coming battle" is to mobilise support for parliamentary elections, at a date yet to be fixed, in order to overturn the new constitution, he told AFP.

- American influences -
The constitutional changes notably get rid of a contested clause on national identity that took effect in 2000 and stipulated that both parents of a presidential candidate must be born on Ivorian soil and not have sought nationality in another country.

The issue has contributed to years of unrest in the world's top cocoa producer.

Violent episodes in the West African country include a coup in 1999, a civil war in 2002 that split the nation between its north and south and a bloody post-election crisis in 2010.

The most recent eruption led to months of post-poll bloodshed with then-president Laurent Gbagbo refusing to step down.

Some 3,000 people died and Gbagbo is now on trial in The Hague for war crimes and crimes against humanity.

Ouattara, 74, hails from central Ivory Coast but his father was born in neighbouring Burkina Faso and the issue of "Ivorian-ness" raised a hurdle in his bid for the presidency.

He eventually overcame this obstacle through a decree Gbagbo was pressured to sign by the international community.

The Ivorian parliament had already approved the new constitution. The government claims that the introduction of a vice president is to ensure continuity if the head of state dies or is incapacitated.

A former top official at the International Monetary Fund (IMF) and Central Bank of West African States (BCEAO), Ouattara is credited with making good use of his contacts to pump investment into the war-scarred economy since taking office in 2011.

After a decade of unrest and a civil war that saw the once prosperous former French colony split in two, Ouattara has overseen major infrastructure works including new roads, bridges and dams.