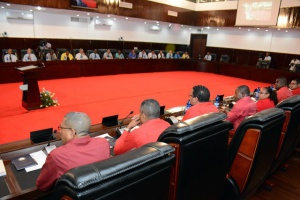 President Danny Faure had nominated six new members for his ministerial cabinet and three were approved.

The 14 members of the President’s Party -- Parti Lepep voted in favour of Meriton as Vice President. The 18 members of Linyon Demokratik Seselwa (LDS) abstained.

Meriton succeeds Danny Faure who is now the Seychelles President. The new Vice President who has occupied various ministerial portfolios, was the Designated Minister and held the responsibility of Minister for Community Development, Social Affairs and Sports.

Macsuzy Mondon -- currently the Minister for Education -- was voted as Designated Minister by the 14 members of Parti Lepep and LDS abstained.

Peter Larose nominated for a ministerial post was elected unanimously. Larose has served in several posts at the World Bank since 2008 and has just completed his mandate as the Executive Director of the Africa Group 1 Constituency at the World Bank Group.

Larose was the only ministerial nominee who received the unanimous backing of the assembly. Three other nominees for ministerial posts -- Marie-Louise Potter, Dick Esparon and Patrick Herminie were not approved by the Assembly. The 14 members of Parti Lepep voted in favour but the 18 members of LDS voted against.

For the first time in the history of National Assembly, nominated candidates had to give a summary on why they were best suited for the posts and answered questions from the Members of the National Assembly (MNAs). The sessions which started on Tuesday ended on Wednesday.

The National Assembly is the legislative body of the Seychelles since 1993 with the introduction of the multiparty democracy.

The assembly reconvened on Thursday to vote on the nominations. In his address before the election, the Leader of Government Business, Charles Decommarmond said that this was a good way to do things.

“One thing that is clear is that this exercise was worth the while and a success for this sixth national assembly,” said Decommarmond.

The Leader of Government Business said this was a vetting and oversight on the executive decision.

“The assembly is not there to block the executive but what we are doing is to see, evaluate what the President is presenting to the assembly,” Decommarmond said.

He added that: “It is clear to every-one who followed the assembly’s live broadcast that the candidates have passed the test. Maybe they did not all come out with the same points but for me they are qualified.”

He ended in calling on all MNAs to approve the nominees.

On his part the Leader of the Opposition, Wavel Ramkalawan said there is a big difference in how LDS is looking at the nominations now that Seychelles, an archipelago in the western Indian Ocean, is in a cohabitation environment.

“For Parti Lepep they have a President who needs a cabinet to lead the country-- for us in LDS we are going through a transition period... Mr. Faure stays as a president in this  transition period,” said Ramkalawan. LDS maintains their request for fresh elections the earliest possible.

He added that: “We do not need a cabinet with politicians but a cabinet where there are technocrats.”

Ramkalawan said politicians will look at consolidating what is there while technocrats will help level the playing field and out of the six nominees there was only one technocrat.

He acknowledged that as per the constitution the president need a Vice President and a Designated Minister.

“The two persons (Vincent Meriton and Macsuzy Mondon) presented are already part of the cabinet so we have no problem with the two assuming the posts they have been nominated for,” said Ramkalawan.

The Leader of the Opposition said they will approve the nomination of Larose for a ministerial post but will not approve the three other nominees Marie-Louise Potter, Dick Esparon and Patrick Herminie.

Before proceeding to presenting the nominees for MNAs to vote Decommarmond said, “that the declaration of transition period is not in line with constitution and I believe that the Constitution is supreme.”

He added that although he did not regret the questioning of nominees exercise, through it, “we have seen the biggest form of political victimisation and three of our people have not been accepted because of their political beliefs.”

Decommarmond challenged the opposition in saying, “You want fresh elections, you will get it.” He added that they if they are approving only three out of the six the opposition can refrain from voting at all and can block all nominations.

This was followed by the presenting of motion calling on the MNAs to vote for each of the six candidates.

State House announced in a press statement posted on its website Thursday evening that President Danny Faure has received a formal communique from the National Assembly stating the approval of the new vice president, designated minister and minister of cabinet.

The three – Meriton, Mondon and Larose will be sworn in at State House Friday morning.

“The President will be addressing the members of the new Cabinet at a special meeting on Saturday 29th October 2016 at 9.30am,” the State House statement added.

Meanwhile the Attorney General Ronny Govinden has said that the president has two choices when it comes to the three other proposed ministerial nomination which were not approved by the assembly.

Speaking on the national radio Thursday evening, Govinden said President Faure can either re-assign the ministerial portfolios among the existing ministers and the newly approved minister or submit a new list of nominees to the assembly for approval.