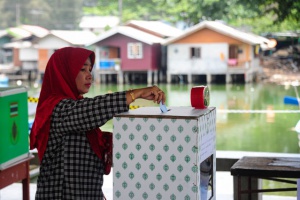 A woman casts her ballot at a local polling station during the constitutional referendum in Thailand's restive southern province of Narathiwat on August 7, 2016. (MADAREETOHLALA / AFP)

(AFP) - Thailand began voting on a junta-crafted constitution Sunday in a referendum where open debate has been banned, as opponents warned the document will perpetuate military power and deepen divisions.

The poll offers Thais their first chance to vote since generals toppled the elected government of Yingluck Shinawatra in 2014.

The kingdom is split after a decade of political turmoil that has dented growth, seen democracy shunted aside and left scores dead in rival street protests.

The military says their new constitution will curb endemic political corruption and bring stability after the dizzying merry-go-round of recent years.

But critics say it aims to neuter civilian politicians and tighten the hold of the military -- and their allies in the royalist elite -- over the country.

Potchana Surapitic, 53, who voted for the constitution at a Bangkok polling station, said she was convinced the military's promise to hold full elections next year was the country's best chance for stability.

"I want the situation to return to normal and I want elections," she told AFP.

"But I also want a government that can manage the country, I don't want it to be a vacuum like before."

Preliminary results of the referendum are expected around 9:00 pm (1400 GMT) on Sunday.

Election authorities have targeted an 80 percent turnout but in the run-up to Sunday the referendum appeared to have garnered little public enthusiasm.

A low turnout is likely to favour the military, while a big showing from the Shinawatra's populous northern heartlands could defeat the document.

Toppled premier Yingluck, whose party rejects the draft charter, urged Thais to participate in the poll.

"Today is a very important day for Thailand... go and vote," she told reporters.

Thailand has a long history of turbulence.

The military has successfully seized power 12 times since the end of absolute monarchy in 1932 and this constitution will be the kingdom's 20th if passed.

But the latest chapter of the political crisis -- dubbed the "lost decade" -- has been particularly painful.

Since a 2006 coup, power has flipped between elected governments led by or linked to self-exiled billionaire Thaksin Shinawatra -- Yingluck's elder brother -- and rule by the army and its establishment supporters.

Shinawatra parties have won all general elections since 2001, scooping up votes of the rural poor and urban working class with policies promising greater wealth and opportunity.

Their success has riled the military and its political friends who accuse the clan of debasing the country with graft and nepotism and have hit back through coups and the courts.

The tension has been compounded by the frail health of 88-year-old King Bhumibol Adulyadej, as elites jostle ahead of any transition.

After casting his vote in Bangkok junta leader Prayut Chan-O-Cha urged people to vote, adding "this is democracy so all eligible voters please come out".

Prayut has banned open debate on the contentious charter and scores of people have been arrested under a special law to curb opposition.

The most divisive clauses call for a junta-appointed senate -- including six seats reserved for military commanders -- to check elected lawmakers and increased powers for courts, which are already accused of political bias.

Another clause makes it easy to begin impeachment proceedings.

"The coup makers tore up the old constitution and robbed us of our rights, promoting themselves to control the government," 'No' voter, Ohm Kontaogan, 35, told AFP in Bangkok.

It is a "robber's constitution", he added.

Junta chief Prayut Chan-O-Cha has promised to hold elections in the summer of 2017, whether or not the charter is passed.

But his previous election date promises have slipped.