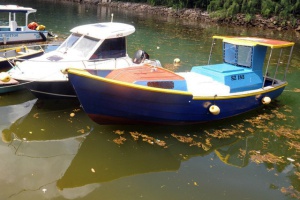 (Seychelles News Agency) - Waters surrounding the port area in the Seychelles capital of Victoria have turned a brown colour, prompting fears of nutrient pollution. Experts say the most likely cause of the colour change is algal bloom, where algae rapidly expands and changes the colour of sea water in the Indian Ocean archipelago

Samples collected from the waters surrounding the port will be sent to neighbouring French-administered Indian Ocean island of Reunion to determine what kind of algae is currently growing in these areas.

During the last week the Seychelles Ministry of Environment and Energy has been receiving complaints from concerned citizens, saying the water is dirty and expressing fears that it might be the result of pollution.

Flavien Joubert, the Director General for Wildlife, Enforcement and Permits at the Ministry told SNA in an interview today that a preliminary investigation suggested excess nutrients had caused the algal bloom.

“What we believe is happening is that during this period when the sea is calm and there’s lots of sun we have a condition called eutrophication because there are lots of nutrients in the sea leading to the rapid growth of algae,” said Joubert adding that it’s a phenomenon that have been observed in previous years.”

“We have seen also in recent years that dead fish have been located floating within the port area or along the east coast and we believe it is related to the same phenomenon as it happens during the same period when it’s hot and the sea is calm.”

It is not known if the algae can have any adverse effects on humans, that is why the Ministry of Environment and Energy, the Ministry of Health and the Seychelles Fishing Authority are working together to evaluate if this kind of algae can be toxic especially for the fish, he says.

Joubert noted that some algae is toxic and can kill species such as fish while others which grows during the day when it’s hot and disintegrate at night can cause a lack of oxygen leading to the death of species living in surrounding area.

He added that in the long term Seychelles need to ensure that discharges from boats, which are high in nutrients namely nitrogen and phosphorus like the remains of fish thrown away by tuna vessels, discharge from the tuna cannery at the fishing port, and water which flows into the sea coming from the drains, are substantially reduced to prevent creation of the conditions needed for the algae to grow.

“The factory is expected to be ready with its new proposal for a better waste treatment facility than the one it currently has which will be presented to the government for its consideration.”

Apart from samples being sent to Reunion island, several other tests are being done to determine the chlorophyll, nutrient and contamination level in the areas where the water has been turning brownish over the last few days.

Some of the tests will be ready almost immediately while others could take at least a week.

As for the phenomenon itself Joubert told SNA that things should get back to normal as the South East Monsoon kicks in (normally from May to October), when it will be drier and cooler hence limiting the ideal condition that causes eutrophication.