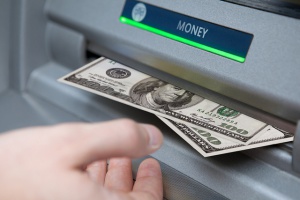 A person takes their money from the cash machine. An amendment of the penal code in Seychelles will make it illegal to commit the acts of cloning automated teller machine (ATM) cards, stealing electronic identities of card users, or acquiring equipment or facilities for committing such fraud. (Tax Credits/Flickr) Photo License: CC BY

(Seychelles News Agency) - Seychelles’ National Assembly has passed an amendment to the penal code to criminalize fraud committed through the use of new technology concepts. The amendment carries tough penalties for offenders.

The aim is to deter and curb such scams after the island nation recorded a series of ATM fraud attempts committed by foreign nationals late last year and at the beginning of the year.

The amendment, once it comes into force after being assented by the president, will make it illegal to commit the acts of cloning automated teller machine (ATM) cards, stealing electronic identities of card users, or acquiring equipment or facilities for committing such fraud.

The Home Affairs Minister explained to parliamentarians this week that the section of the law dealing with forgery, coining and counterfeiting was outdated and did not cover new technology being used for fraudulent practices that affect the banking sector.

Charles Bastienne said that new sections have to be introduced to cater for such criminal offences.

“Because our law does not cover these types of fraud, those arrested and charged were either freed or deported without being convicted,” said Bastienne.

Four Chinese nationals are also being remanded in custody for having committed the same offences in late March.

In most of the cases, card cloning devices, cash, as well as electronic devices including laptops, pen drives and mobile phones were found in the possession of the suspected fraudsters.

New sections that are being added to the penal code mean such offences will now be punishable by law in the 115-island archipelago in the western Indian Ocean.

“These types of scams are very complex and it is very difficult to recover the stolen money. The harsh sentence will deter anyone from committing the offence and if they do, they will be taken to court,” said Bastienne.

Seychellois authorities are also working on a comprehensive law on cyber-crime with the help of international experts.