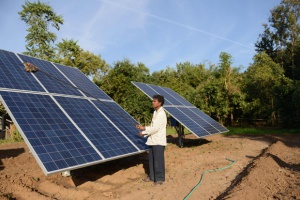 (AFP) - The World Bank on Thursday said it would increase funding for renewable energy and other projects aimed at reducing the effects of climate change in developing countries.

The plan -- which follows the landmark UN climate conference that yielded the Paris Agreement in December -- calls for funding projects that would add 30 gigawatts of renewable energy to the global grid, which would power 150 million homes with renewable energy by 2020, the bank said in a statement.

Among its other proposals, the plan calls for quadrupling funding over five years to make transport systems more resilient to climate change.

The International Finance Corporation -- a branch of the World Bank Group that serves the private sector -- plans to expand its climate investments from the current $2.2 billion a year to a goal of $3.5 billion a year to help finance the plan.

In addition to its own financing, the World Bank also plans to direct $25 billion in commercial financing for clean energy over the next five years, the statement said.