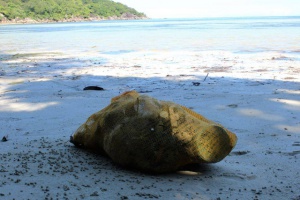 The Marine Debris Challenge is a means of educating the public on conservation of the beaches and the hazards of plastic waste ending up in the ocean. (Zara Pardiwalla)

(Seychelles News Agency) - Seychelles is participating in Australia’s Marine Debris Challenge 2016 for the first time to get the opportunity to continue efforts to eliminate plastic waste in the country, a team member says.

The challenge, which is a means of educating the public on conservation of the beaches and the hazards of plastic waste ending up in the ocean, started on February 22 and ends on Earth Day, April 22.

“Our participation in the Marine Debris Challenge has provided us a medium through which to expand our educational efforts to include the harmful effects of all forms of plastics and marine debris in general,” the team's co-leader Zara Pardiwalla told SNA.

The Marine Debris Challenge is an initiative of the Positive Change for Marine Life (PCFML) association in Australia taking place every year. Teams from different countries host cleanups and educational programs to raise awareness on the impact of marine debris and how communities can collectively mitigate them.

This year’s challenges features five team from Australia and one from Seychelles.

Pardiwalla says the timing is fitting since a few months ago the World Economic Forum warned that there would be more plastics than fish in the oceans by 2050.

The team from Seychelles, an archipelago in the western Indian Ocean, is led by SIDS Youth AIMS Hub (SYAH), a not-for-profit comprising of its members, local businesses and people from various communities on the islands.

The local team has the support of the British High Commission to get their survey, clean up and education materials and also from the locals.

Three clean-ups were done, two on the main island at Bel Ombre in the north and Cap Ternay in the west and on Silhouette. The team collected 33 sacks of waste.

The co-team leader says that “the extent of the problem in Seychelles is troubling, and we did not fully realize this until we undertook this challenge."

Over 10 sacks were collected at Cap Ternay in the space of a couple hours.

“Given the geographical isolation and low visitation of the site, it’s shocking. To make matters worse, this is an area that is routinely cleaned up by Global Vision International (GVI),” added Pardiwalla.

The Seychelles team told SNA that through their education, they have come to realize that there is a lack of awareness amongst the population in regards to the effects of plastic waste.

Another clean-up is scheduled for April 10 at the Anse Royale beach, on the south coast of Mahe.