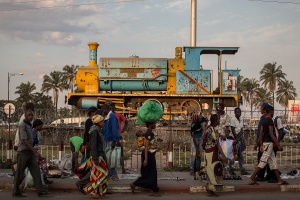 (AFP) - The spectre of high debt is raising its head again in Africa, analysts say, as sub-Saharan nations that borrowed cheaply on global markets are now squeezed by a commodities crash.

The return of debt troubles in Africa has caught some by surprise, they say, 20 years after a global campaign was mounted to offer debt relief to the world's most impoverished nations.

"It is clearly a source of concern. People did not see it coming," said Julien Marcilly, chief economist at French group Coface, which offers worldwide insurance to protect firms from the risk of clients defaulting.

An IMF-World Bank programme launched in 1996 has to date approved $76 billion (68 billion euros) in external debt relief for 36 of the world's heavily indebted poor nations, of which 30 are in Africa.

For some of those countries, however, debt levels are rising again to worrying levels.

Relieved of their debt burdens by the international programme, countries enjoyed the budgetary freedom to boost economic growth, which was further propelled by soaring commodity prices.

Many of them issued bonds for the first time to raise money on financial markets as borrowing costs slumped to record lows in mid-2014, the New York-based credit rating agency said.

"The tide has turned," it warned, however, predicting that most of these countries would have to spend more and more over the next three years to service their debt.

Many of those sub-Saharan countries will face a difficult choice between cutting spending or being obliged to pay higher debt and interest payments in the future, Standard & Poor's said.

And this time, a large part of the debt is held by private creditors, rather than institutions such as the IMF or World Bank.

A study by the French Treasury said the IMF-World Bank initiative had slashed the average external public debt of the 30 African countries from the equivalent of 119 percent of annual economic output to just 33 percent between 2000 and 2014.

Yet some are now sliding deeper into debt at a "very sustained pace", the Treasury said.

Of the 30 African countries that had previously secured international debt relief, 13 have pushed up their debt levels by the equivalent of 10 percentage points of annual gross domestic product (GDP) in the past five years, it said.

There is no short-term risk of a new debt crisis for the great majority of African countries, the French Treasury said.

But "a small number of them have seen a period of very sustained debt growth", it said, warning that they could soon return close to the levels of external debt that reigned before the global debt relief initiative.

"We must ensure we do not fall again into the debt trap," African Development Bank president Akinwumi Adesina warned at a conference of business leaders in Abidjan this month.

Despite a recent rise in debt levels, African countries remain less indebted than many advanced economies.

"The total public debt of Africa amounted to 38 percent of continental GDP in 2014 compared with 111 percent for OECD nations," said Carlos Lopes, executive secretary of the UN Economic Commission for Africa.

"Debt levels will deteriorate in countries with a weak level of budgetary discipline and those that have borrowed excessively," Lopes said.

He urged countries to strengthen debt management capacity and to report on how they are using their borrowed funds.