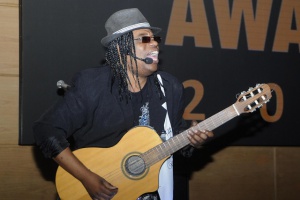 Marie has been away from his home island, Seychelles, for 17 years after he grabbed an employment opportunity in the United Arab Emirates. (Louis Toussaint, Seychelles News Agency)

(Seychelles News Agency) - Famous for his many hits such as ‘Tile Mone’ and ‘Mesaz Mon Dalon,’ Seychellois entertainer Emanuel Marie is still making his country proud in Dubai.

Marie left Seychelles 17 years ago to take up employment in the United Arab Emirates.

The 50-year old artist visited his native land, the Seychelles archipelago in the western Indian Ocean, last month. He performed at the Seychelles Chamber of Commerce and Industry (SCCI) Business Award Ceremony.

The event was held at the Eden Bleu Hotel, Seychelles's first business hotel, situated on the reclaimed Eden Island equidistant between Victoria, the capital and the international airport.

Marie, speaking to SNA during his short trip, said that despite being on another continent, he is still in touch with the people of Seychelles. And he credited his music career to his father, also a musician.

“Growing up in a family full of musicians like my father, I knew that music would be in my future. By the time I was a teenager, I had already learnt how to play the guitar,” said Marie.

The Seychellois artist recorded a few songs at the local radio station and that made him popular with his peers, he said. Marie’s career as a musician and singer really started as a teenager when he joined the now-closed National Youth Service (NYS).

“It was there that I really developed my musical talents. I learned how to play more than one type of instrument and more than one genre of music,” describes Marie.

Marie and his schoolmates formed a band called ‘Beginners,’ which they later renamed ‘Tropics.’ The latter became a popular band in Seychelles and played regularly in hotels.

After NYS the artist joined the then well-known local band ‘Night Shades’ and performed in hotels as a guitarist and sometimes as the lead singer.

Marie also made a few solo appearances as he became confident enough to play on his own. He realized that playing in a band was not enough to sustain a career.

“Performing solo I got more gigs, and more money than I did when performing in a band, so I decided then to pursue my solo career and leave the band, a decision that was really hard for me as we were all friends,” Marie said.

It was his performance at the Miss World Beauty Pageant in Seychelles in 1997 that completely changed Marie’s life. For Seychelles, hosting the international pageant was considered the event of the century, placing the country on the world map. It also put in the spotlight local artists and performers for the whole world to see.

Marie performed a solo piece which caught the attention of a business tycoon of Indian origin, Sumaya, famous in Dubai at that time for his multiple businesses in the entertainment industry such as Radio Asia.

Sumaya, who sponsored one of the contestants, Miss India who was crowned Miss World that night, was impressed with Emanuel’s performance therefore asked him to join his entertainment group.

“I had never heard about Dubai before in my life but he asked me to come and visit the country and that I will love it there,” said Marie.

He took the risk a year later in 1998 and went first to visit the place. He decided to stay and began playing at parties and events. The new adventure allowed him to travel and meet celebrities from Europe, India and the Americas, including Puerto Rican Ricky Martin.

The Seychellois entertainer stayed with the group for about three years before he again decided to go solo.

With his unique voice, the ability to sing and speak many languages, a charismatic character and most of all his passion for music, doors opened quickly for Marie. He was soon fully booked, hopping from hotel to hotel in Dubai, a workload he still carries out.

“I had a big advantage over other entertainers from other countries. Most performers could only play one type of music such as reggae and sing only in English. Being a Seychellois, I could perform an infinite genre of music, and sing in multiple languages,” said Marie.

“I was not more musically skillful than other entertainers in the industry but I put a lot of effort on the presentation of my performance. This is why 17 years later I am still in Dubai,” he said.

“Back in the 1990s a group of Seychellois musicians including myself led by Patrick Victor got the chance to attend a music festival in Montreux, Switzerland. For me this was a milestone in my musical career,” he said.

Marie was proud to represent his country at such a prestigious event. “Other local artists such as Joe Samy, Stella Nibourette, and Jean Ally were also in the group and it was an unforgettable experience for all of us,” he added.

After 20 years of performing, the Seychellois entertainer has in his collection seven albums and countless singles that he has produced and recorded. His first solo album entitled ‘Tile Mone’ released in 1996 was a huge hit in Seychelles and he says this album paved the way to his success.

“I am planning to invest in a studio in Dubai. This is an ongoing project because I need to take a loan to make it very professional, and once I set this up I will be working with a lot of upcoming artists for small music productions,” Marie said.

Marie, who recently turned 50, met his wife in Dubai and is now happily married. His 17-year old daughter from a previous relationship is following in his musical footsteps.

Marie said he would love to return to Seychelles to settle down, but that the time is not yet right. There are too many opportunities in Dubai, but Seychelles is and always will be in his heart.