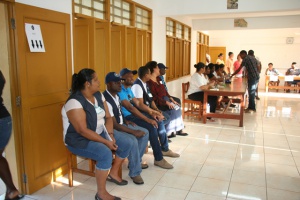 (Seychelles News Agency) - International election observers say that Seychelles’ Constitution should be amended so that electoral petitions may be heard before the swearing in of the next president.

Commenting on the second round vote of Seychelles’ president election, the South African Development Community Parliamentary Forum (SADC-PF) said the Constitution should be changed “to allow the determination of presidential elections results petition by the Constitutional Court first before installation of the new president.”

Seychelles held the second round of its presidential election last week. Incumbent President James Michel was sworn into office Sunday afternoon after the election commission said he had won 50.15 percent of the vote.

The SADC-PF observers said in their election report shared Sunday that the island nation’s Constitution should be amended to “provide for timeframe for the determination of petitions on the Presidential Election results by the Constitutional Court in order to ensure speedy resolution of petitions in line with good practice.”

Wavel Ramkalawan, Michel’s second-round opponent, asked the electoral commission to carry out a recount of the second-round vote. He also filed notice saying he wanted to formally challenge the results.

Seychelles, an archipelago in the western Indian Ocean, was participating in its first-ever second-round presidential election from December 16 to December 18. None of the six candidates running for president in the early December first round won more than 50 percent.

Observers noted with great concern that many reports were brought to their attention by many stakeholders and citizens regarding practices by both parties that may substantiate illegal acts of vote buying and undue interference in the freedom of some voters to exercise their choose.

The African Union Expert Election Observation Mission (AUEEOM), reported that it observed one polling station where “the number of ballots in the ballot boxes did not tally with the number of used ballots.”

It said there were inconsistencies in the handling of invalid ballots in another polling station.

Observers also noted inconsistencies in the assistance given to the elderly and voters with a disability. The observers said changes should be made so that those voters may cast ballots in a way that protects the secrecy of their choice.

The observer missions commended improvements made between the first round and second round votes. Recommendations were made to increase the transparency and credibility of future elections.

It was generally noted that the election took place in a peaceful and orderly manner. However it was not stated if the election was fair and credible.

Mission leaders and representatives announced that final reports for each respective organization will be released after all ongoing processes have been finalized. Depending on the organization the report will be ready in 30 to 90 days.