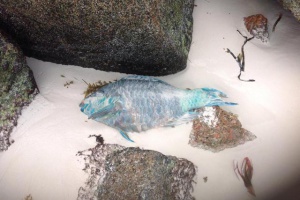 People in Seychelles an archipelago that relies heavily on fish as its main source of protein have been alarmed by the death of large amounts of coral reef fish in recent days and the discolouration of some parts of the sea. (Cindy Etheve)

A large amount of dead fish mainly coral reef fish and other marine species have been washed onshore in various parts of the main Seychelles island of Mahé, second most populated island of Praslin and other satellite islands, in recent days.

“We found it on Friday, and they could be found on almost all the beaches especially in the lagoons and where the water is usually shallow. There were all types of fish especially those that usually lives or frequents coral reef such as moray eels, parrot fish and others,” Sam Hope, the Manager of Cousin, a special nature reserve, located off the west coast of Seychelles second most populated island of Praslin told SNA this morning.

“Today [three days later], we have only seen a handful but it seems whatever have cause the phenomenon has dispersed as there are not so many dead fish recorded. We have buried most of the dead fish because as you know Cousin is open to visitors throughout the week, but we have kept a few samples as well, which we hope to get analysed.”

The same thing was reported by residents of several areas on Praslin including at Anse Kerlan, Amitie and Grand Anse.

“Altogether we estimate that we have removed over 200 fish which includes different species from these areas throughout the weekend. After collecting them, we had to bury them as they were starting to attract flies and we did not want anybody getting in contact with them as we were not sure what caused the phenomenon,” Marc Francois, a Chief Inspector of the Landscape and Waste Management Agency, on Praslin LWMA, told SNA.

Apart from the dead fish dumped onto the beach from the sea, and other dead species including turtles observed dead and floating in the sea itself, another major occurrence observed is a change in the colour of the sea in some areas to a yellowish, red to dark green. Following monitoring and observations made, the environment ministry has confirmed reports of an algal bloom.

This is a phenomenon which occurs when algae rapidly expands and changes the colour of sea water and the natural phenomenon occurs when there are sufficient nutrients, calm sea and other conditions, which are favourable for rapid algae growth.

A similar phenomenon was observed in the waters surrounding the Seychelles Port of Victoria in June last year, although no mass death of fish species was recorded.

According to the Principal Secretary for Environment, Alain de Comarmond, the first sighting of the algal bloom was early last week off Fregate, an island lying 55 kilometres east of the Seychelles’ most populated island of Mahé.

He told SNA that as was expected due to the tide and current movements the phenomenon later spread to Praslin, and neighbouring island of Cousin and eventually along the western coast of Mahé all the way from Port Launay down to the southern part of the island at Takamaka, all the way to Grand Police.

“Analysis conducted today [Monday] have shown that one of the species of plankton causing the algal bloom contains toxic properties, the same plankton has occurred before in other parts of the world,” de Comarmond told SNA this afternoon.

“We have been able to identify on of the planktons but testing will continue by the Seychelles Fishing Authority in collaboration with the Marine Parks Authority that has marine biologists, as they have the capacity to try and identify other plankton species.”

Nevertheless it has not been identified whether any toxic plankton is actually causing the death of the fish species in several parts of the archipelago.

“We will be sending several fish samples overseas either to Reunion or France to be able to determine whether the fish have died as a result of the toxins or simply due to a lack of oxygen. The algal bloom when it produces what resembles an oil spill in the sea it blocks the circulation of oxygen.”

According to de Comarmond they are aiming to have the results in by the end of this week to establish what is really causing all of the fish to die.

A committee bringing together officials of the health, environment and tourism ministries, fishing and national parks authorities as well as the division of risk and disaster management have been set up to evaluate and monitor the situation and it has come up with several precautionary measures while tests are being done on the fish samples.

Although no one has fallen ill so far from consuming fish in recent days, the health ministry is advising people not to consume any freshly caught fish until a clear picture of the situation has been established.

The Seychelles Fishing Authority has also called on fishermen, and this applies mainly to artisanal fishermen that bring in the daily catch especially coral reef species that are being most affected, to refrain from going out to bring in those species.

Hotels are have also advised to inform the clients to refrain from going into the sea if they notice any discolouration of the water and to report to the clinic if any irritation occurs after a swim.

The situation is also being closely monitored and observed by other individuals and groups including local not-for-profit organisation, Nature Seychelles which manages the Cousin Special reserve.

The NGO has recorded a list of several species from parrot fish, conger eel, cardinal fish, soldier fish and an impressive amount of over 400 surgeon fish that have been washed up on the beach.

The main observations made by Nature Seychelles, which the general public can also take into account, is that all of the dead fish “have a death rictus of open mouth and bulging eyes.”

“Most fish show abdomens expanded and smell very bad suggesting bacterial decomposition has started faster than normal,” says the NGO, which similarly to the health authorities have cautioned against the consumption of any such fish.

“We also recommend to invest in the resources needed for a full evaluation of future fish kills, to discern the nature of the fish kill, as well as how to prevent it,” says Nature Seychelles.

Meanwhile, an aerial survey is also being undertaken by ZilAir a local helicopter company and the Seychelles Airforce to get a clear picture of the extent of the algal bloom.

“There are reports that there were some sighting of something similar to an algal bloom as far as Alphonse two weeks ago, so the aerial survey will give us a better idea,” says de Comarmond.

The fisheries sector is considered the second pillar of the island nation’s economy and fish is the main source of protein for the population of around 93,000 people.