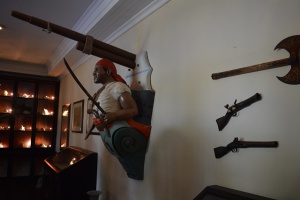 (Seychelles News Agency) - Among those who like to speculate about the whereabouts of the hidden treasures of long-dead buccaneers, Fregate Island in the Seychelles is one of the favourite possibilities where the famous treasure of Olivier le Vasseur or ‘La Buse’ might one day be uncovered.

Fregate Island is the easternmost of the inner granitic islands of the Seychelles archipelago and the seventh largest out of the entire collection of 115 islands smattered across the western Indian Ocean.

Centuries after the capture and death by hanging of this notorious early 18th century pirate on the neighbouring Reunion Island, the luxurious private island of Fregate, with its outstanding natural beauty encroached on by humans with a minimal number of private and exclusive villas, is also bursting with legends of pirates and treasures.

“Various islands have their own story of pirates but we firmly believe that [the treasure] is here. And so do many other people such as Ian Fleming [author of the famous James Bond spy novels] who at some point was involved in the search,” said Steven Larue, the guest services manager of Fregate island private.

This was originally spurred on by a report made by the Natural History Society of Mauritius in the 1830’s documenting excavations sites, old buildings and other items, including a chest of crockery found on Fregate by the first inhabitants to settle on the island.

At Anse Parc, a wall believed to be older than 300 years old – before the first settlers arrived in the Seychelles – is perhaps the firmest evidence that Fregate might indeed have been a pirate’s hideaway.

Fregate Island has photos, artefacts and documents to support their claim to this legend in the small museum which has been set up in the newly-renovated plantation house, which is the oldest building on the island.

Fregate and the bigger picture of Seychelles history

When the first settlers arrived on Fregate in the 18th century, their goal was to plant and harvest coconut, cinnamon, vanilla and other spices for export, mostly to European countries.

With descendants from various part of the world, a few of their precious tools and possessions such as pots, jewellery, knives and coins were left behind when they finally gave up on the idea of agriculturally developing the island of 219 hectares.

These tools have been collected by the modern inhabitants of the island and are now the centre of attraction for visitors to Fregate.

What are not from the island, were according to Larue collected or brought from curators in the Indian Ocean islands of 93,000 inhabitants.

“Some of our visitors choose not to stay on Mahe, [the most populated island of Seychelles], so through this project we are promoting the Seychelles culture by bringing it closer to them. They can come along and read the information and it helps them to have an idea of the island’s history and ecology,” Larue told SNA.

Some artefacts present a reality of Seychelles in days gone by that is often untold. The island of Sainte Anne, located just off the north-eastern coast of Mahe, today preserved as a national and marine park, was once the site of one of the most unpleasant parts of Seychelles’ history – the whaling industry.

“Once I brought a couple here and they were very in awe of the photo of the last whale ship [the Charles W. Morgan, built in 1840]. It turns out they were part of a society that restores old ships and they were trying to restore this one. This goes to show that we may think that our history is not interesting to others but it is,” said Larue, standing beside old harpoons of various sizes and shapes.

Great names of Seychelles history are also well documented and the rare portraits hanging on the walls include Jean Moreau de Séchelles, the French finance minister, after whom the archipelago was named, and French Foreign Minister César Gabriel de Choiseul, Le Duc de (the duke of) Praslin, a commune in north-central France, after whom the second largest island, Praslin, was named in 1768.

Fregate Island is endowed with various reptiles, insects and birds that are unique to the Seychelles.

With the opening of the museum almost two years ago, the environment staff of Fregate got to work in showcasing the natural history of the island.

Their collection includes information on various birds, including the critically endangered Seychelles Magpie Robin which has found refuge on the island and is already a great attraction in the wild, but not always easy for bird-lovers to spot.

Well-preserved creepy-crawlies special to the island, such as the harmless and shy Whip spider (Phrynicus scaber) as well as the Giant Crab spider (Damastes validus), which can reach up to 12cm in size and is endemic to Seychelles, are also displayed.

But if spiders are your worst nightmare, not to worry – Larue explained to SNA that most of these species are nocturnal and are just plain difficult to find without help

A collection of photos display some examples of impressive catches that an experienced fisherman might get while on a fishing expedition just off the shores of the island.

A wooden display lit up by small artificial lights shows off some of the largest specimens of corals and shells in the world.

“The collection of shells comes from the Indo-Pacific region... They have been bought by the proprietors [Fregate Island Private is part of the Oekter collection which owns tourism establishments in several countries],” said Larue. “Smaller shells are from the beach and hence they are often not perfect as we do not collect shells from the reefs around the island.”

Some legends surrounding the island are far-fetched but poetic, such as the old tale of the ‘headless woman’ that roams the island at night and whose refuge in a cave helps keep the shores of Fregate safe from intruders.

Truth or not, it may have helped to keep Fregate at bay from poachers, which might endanger its plentiful population of sea turtles and abundant marine life, but it has also been a factor in keeping the inhabitants of over 150 islanders away from the night-time activities that Seychellois living on other islands usually enjoy, such as traditional dancing.

After the Second World War ended in 1945, the world changed, even in remote places such as this. The plantation era in the Seychelles eventually gave way to a tourism-based economy, and the plantation house guarded by two cannons, as well as the artefacts that remain in the museum are a gentle reminder of days long passed and the arduous ongoing work necessary to keep the natural treasures of the island safe.