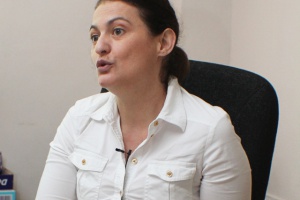 Senior oil and gas expert Ilhem Salamon, who works for the World Bank, spoke to journalists in Seychelles about the benefits and limitations of the Extractive Industries Transparency Initiative (EITI) (Metissage Seychelles)

This is the view of Ilhem Salamon, a senior oil and gas expert at the World Bank, who has been involved in the Seychelles’ compliance process since the island nation was accepted as an implementing member of the EITI standard in August last year.

Salamon and her colleague Gael Gregoire, a senior policy officer for the Environment, Social and Governance department at the International Finance Coporation, a subsidiary of the World Bank, met with members of the local press last week to answer questions about the EITI process.

Seychelles joins 45 other EITI countries worldwide which are required to extensively disclose revenues from extractive industries and efforts taken to improve accountability in the exploitation of oil, gas and minerals.

Seychelles is required to publish its first annual EITI report by February 6, 2016, which will disclose all revenues and payments received from oil companies thus far.

Although no hydrocarbons are currently being extracted from beneath the waters of the 115-island archipelago’s vast Exclusive Economic Zone (EEZ), there are three companies currently prospecting for oil, and another two companies applying for exploration licenses.

Despite uncertainty over the future of the global oil extraction industry with plummeting oil prices and rising calls for divestment from fossil fuels, Salamon is dismissive of the thought that implementing the EITI process in Seychelles could be an exercise in futility.

“The first thing that is important with the EITI is that it really opens a dialogue, and what we see is that there might be more extractive industries than just petroleum exploration, and you might want to include other extractive industries than just petroleum, you might want to include fisheries,” she explained.

Should there be no commercially viable oil discovery made in Seychelles, or if the price of oil drops to such an extent that prospectors are forced to pull out, Salamon said even then the funds used to put the EITI in place have been mostly up until now covered by a $200,000 grant provided by the World Bank, and added that implementing the standard while Seychelles was still in the exploratory phase was the right time to do it.

“EITI can also be used to attract private investors,” she said. “I can imagine that if I am a major oil company, just the prospect of doing petroleum development in Seychelles would be scary, because you don’t know how much civil society opposition you’re going to face, you don’t know if their position is going to be rational or irrational.”

Salamon added that using the EITI framework to look for good investors in the oil sector was an objective used by many countries in Eastern Europe and Latin America.

“We can’t make a judgement on what is in the future of petroleum development, but we believe that it is the right decision that the government is making by engaging early and setting up the system early because in a lot of countries the petroleum development proves to be very challenging to manage, and didn’t result in true economic growth,” she continued.

90 major oil and gas companies are members of the EITI, and Salamon said it was because it was simpler for them to make a decision to operate in a country which already has a platform with all the relevant stakeholders to engage in dialogue and negotiation as well as a booklet with all the laws, regulations and requirements set down by each member country.

“The same would apply to good environmental regulations because companies know what to expect, and what kind of performance they will expect even before they come into the country when they look at the legislation or the regulations based on our EHS [Environmental, Health and Safety] guidelines, which relies on a lot of international standards, there are no good or bad surprises,” said Gregoire. “They know that what we are requesting makes good sense both for them and for the environment, so it is also reassuring for them.”

When Civil Society Organisations (CSOs) in Seychelles met with EITI Multi-Stakeholder Groups (MSGs) from Tanzania and East Timor in September, calls were made to have greater focus on the environmental risks of oil exploration and extraction within the EITI process, and Salamon said that the Seychelles MSG was now considering including the environmental reporting in the EITI process.

“The EITI is beyond being a standard, it’s really a process, and the importance of giving a voice to CSOs, and providing training to CSOs so that they know what to look for… and where they can step in is fundamental to the EITI compliance process,” she said.

Salamon added that in the assessment of Seychelles’ compliance to the global standard, the extent to which the government provides civil society a voice through the multi-stakeholder group would be “thoroughly analysed and assessed” against the international standard.

“I think that EITI has enabled increased participation of CSOs in countries where you would not expect them to have any voice, so I am rather optimistic that in Seychelles it should lead to a very positive outcome as well,” she said.

“Since the MSG is contemplating the idea of including mandatory reporting on the environmental impact of petroleum development, they [the Ministry of Environment] have been invited to reflect on what would be the best indicators to include in such a report and when,” she said.

A helping hand in the battle against corruption

Salamon pointed out that the EITI reports could help uncover corruption, as was the case in Nigeria, which is one of Africa’s largest oil producers. In Nigeria’s 2012-2013 EITI report, the MSG discovered that the government had failed to declare oil revenues paid to it by oil companies to the tune of around $20 billion dollars.

“Nigeria and Seychelles don’t really have much in common, but what is common to all the implementing countries is really the willingness to move forward, identify issues and to resolve them,” Salamon said.

But she cautioned that the standard would not solve all forms of corruption in the oil industry.

“EITI is a minimum requirement, it’s not going to resolve corruption, there are many ways in this world to do corruption, but at least it doesn’t allow the most obvious and rampant corruption,” she said.

“Becoming a member of EITI doesn’t mean that if you are a country with huge challenges then your challenges are going to disappear overnight, but it means that – and I heard this from one of our implementing countries – that ‘we live with corruption but we will fight corruption and this is our daily battle’.”