Presidential elections in Seychelles rescheduled for December 3rd to 5th 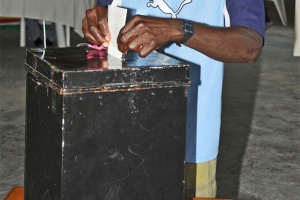 (Seychelles News Agency) - Seychellois citizens will head to the polls from December 3 to 5 to elect their president.

The Chairman of the Seychelles Electoral Commission, Hendrick Gappy, announced these dates at a press conference on Tuesday.

Last week, after consultation with the island nation’s main political parties, the Electoral Commission decided to postpone the election date, which was initially scheduled to take place between November 19 and 21.

The Electoral Commission wished to give more time to political parties to prepare for the elections.

The official nomination of presidential candidates has also been rescheduled to November 11.

The President of Seychelles, James Michel, announced his intention on October 1 to call early presidential elections, although his term officially expires only in the first half of 2016.

President Michel, who is the candidate of the ruling Parti Lepep (People’s Party), will stand for a third and final five-year term as stipulated by the constitution of Seychelles.

The elections will take place over three days to allow Seychellois living on remote islands to vote first, followed by the inhabitants of the three main populated islands of Mahé, Praslin and La Digue on the final day.

The archipelago of the Seychelles is made up of over 115 islands scattered across the western Indian Ocean.

Since the return of multiparty politics in 1993, Parti Lepep has won each presidential election in the first round with more than 54 percent of the vote.