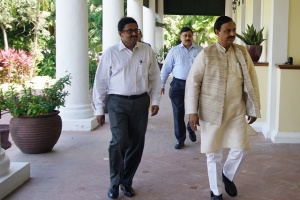 (Seychelles News Agency) - Tourism and culture are two areas of cooperation between Seychelles and India that have witnessed 'great progress' and where the potential exists for even more exchanges between the two sides.

This was highlighted on Monday at the end of the visit of the Indian State Minister for Culture, Tourism and Civil Aviation, Dr. Manesh Sharma to the Indian island nation.

The Indian State Minister had previously attended several activities organised as part of this year’s Seychelles India Day celebrations over the weekend.

He was present at a musical gala night held at ‘Stad Popiler’ in the Seychelles capital of Victoria on Saturday and also joined the Seychelles Tourism and Culture Minister for the official ribbon-cutting ceremony to unveil the sculpted piece done by world-renowned Indian sand artist at Beau Vallon beach on Sunday.

This year the third annual celebrations combined with an IndiaFest was held over four days since last Friday.

“... With tourism, culture and civil aviation, there is a lot of potential of these sorts of exchanges and the increase of bilateral tourism, increasing the connectivity...,” Sharma told the local press in an interview on Monday afternoon after his talks with president Michel.

“…We propose to send a group of media personnel and tour operators to this country, to learn how beautifully they have managed the coastal side of tourism industry... We have rich cultural relations with each other.”

According to a press statement issued by State House, in his meeting with the Indian Minister, President Michel who attended the opening ceremony of the Seychelles India Day described the event as “an excellent, beautiful and cohesive expression of the multi-ethnic nature of Seychelles and Indian societies.”

“The Seychelles India Day is an excellent opportunity to celebrate the natural affinities and the long-standing relations and friendship between our two countries and peoples,” said Michel.

Aside of discussing existing bilateral cooperation between Seychelles and India which established diplomatic ties in 1976, the upcoming Third India-Africa Summit to be held in New Delhi also featured highly on the agenda.

The four-day summit will be taking place from October 26 to 30 and will bring together Heads of Governments from over 50 nations across the African continent for discussions with the Indian government.

The Seychelles President James Michel will be among African leaders heading to the meeting to discuss India-Africa relations, at the invitation of Prime Minister Narendra Modi who also visited the Indian Ocean archipelago in March this year.

This was Michel’s sixth visit to India as Head of State.

The head of state visited India, in 2005 and 2010 and in August this year on state visits.