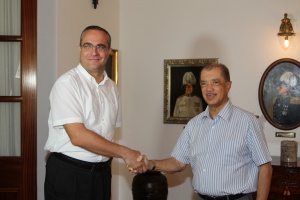 (Seychelles News Agency) - The outgoing Slovak Ambassador to Seychelles has praised relations between the two countries and said that his main focus of work was to develop the education and health cooperation during his three and a half year tenure.

Ambassador Michal Mlynar spoke with the local press at State House in Victoria, the Seychelles capital yesterday morning after he paid a farewell call on Seychelles President James Michel.

“There has been an agreement reached that every year the Government of Seychelles, based on the bilateral arrangement with the Government of Slovakia, will be sending two or three students [to study in Slovakia]. It’s a bit of  motivation for young Seychellois who are interested, to work hard to be among those who will go study medicine in Slovakia,” said Mlynar.

There are currently seven Seychellois students studying medicine in Slovakia.

He said that the Slovak government would also be offering Seychellois doctors the chance to gain more experience in Slovakia.

According to the ambassador, the University of Seychelles is working to set up a joint study programme in public health with a private Slovak university, as soon as September 2016.

Students graduating from the programme would benefit from a double diploma from the University of Seychelles and the Slovak university called St. Elizabeth University of Health and Social Work, which the Ambassador says has ‘added value’ as it is a European Union diploma. Students would also have the chance to visit each other’s institutions.

In the field economic cooperation, the Seychelles and Slovakia are looking into collaborating in renewable energy and information and communication technology as well as hydro-energy and tourism.

“We have offered to Seychelles expertise and capacity building in exploring small hydro-power stations as an additional source of energy. Secondly, water and waste management, water purification, filtration and waste management which I know are important areas for Seychelles,” said Mlynar.

Businesses in Seychelles and Slovakia could also see the start of new partnerships as the two countries look at the possibility of an agreement between their chambers of commerce. A business delegation from Slovakia is expected in Seychelles in the first-half of 2016.

Ambassador Mlynar was the 6th Slovak Ambassador to the Seychelles since the two countries established diplomatic relations in 1993. He was based in Nairobi.