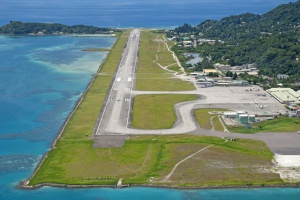 Time for a change? Seychelles airport authorities are confirmed to be in discussions with their Abu Dhabi counterparts to build better facilities for travellers (Gerard Larose, Seychelles Tourism Board)

Speaking to SNA in an interview, Minister Morgan, who is also the minister for Foreign Affairs in the 115-island Indian Ocean archipelago of 90,000 people, was reacting to a report which surfaced in the UAE media this week which stated that the Abu Dhabi Airports Company (ADAC) was currently in negotiations with the Seychelles authorities to build a new airport.

The minister clarified that plans to build a new state-of-the-art airport are under discussion with ADAC, and that in the meantime, the Seychelles Civil Aviation Authority (SCAA) would continue with its improvements on the existing infrastructure which were much needed.

“We have been in discussion with ADAC for the past three years, discussing how they could provide support to develop our airport infrastructure in general,” Minister Morgan told SNA. “The key projects under discussion included a new international terminal building, a state-of-the-art facility that would help us in our efforts to serve as a regional hub for the next 20 years or so.”

Minister Morgan said that the new international airport, which would be situated to the north of the existing airport, formed the main part of a broader technical assistance and investment project for the UAE to assist Seychelles.

The existing Seychelles International Airport, which was originally opened in 1972 by Queen Elizabeth II while Seychelles was still under colonial rule, is becoming too small to handle the increasing amount of traffic to the islands which is mostly generated by tourism, the main pillar of the Seychelles economy.

In 2014, the islands welcomed just under a quarter of a million visitors to its warm, tropical shores, and so far in 2015, tourism has seen a 15 percent increase compared with the previous year..

Minister Morgan explained that in addition to the new airport building, the existing airport facility would then be used for additional services, such as a terminal for private jets, additional cargo space and other needed facilities as the airport requirements grow.

The Seychelles is currently undergoing an IMF-assisted economic reform programme, aimed at bringing down external debt. After the global financial crisis of 2008, tourism to the islands from Europe, which is the Seychelles largest tourist market, fell dramatically, leaving the archipelago with no foreign exchange with which to pay its spiralling debts.

As a small island developing state, the Seychelles still remains vulnerable to external shocks, and the IMF have cautioned against investing heavily in infrastructure projects.

While discussions are ongoing with ADAC, Minister Morgan told SNA. “We will be upgrading the existing international arrival facilities, upgrading the restaurant, the land-side facilities and we will be building a mezzanine floor in the departure lounge to be able to cater for more departing passengers, a new domestic terminal, upgrade the transit lounge and provide for some day rooms for incoming travelers awaiting a domestic connection or for those awaiting a outbound flight having come from the islands, to generally improve the standards at the airport.”

The airport upgrade project was announced to the media in the first week of June. According to a report in local newspaper the Seychelles Nation, the Seychelles Civil Aviation Authority (SCAA) would be footing the bill for the majority of the ongoing upgrades, totalling 125 million Seychelles rupees, or around $9.4 million.

According to UAE news website The National, a spokeswoman from ADAC confirmed that negotiations over the contract were ongoing, but declined to give further details.

“The company is not in a position to disclose further details at this stage, but we believe that such a venture will further strengthen the ties between the government of Abu Dhabi and the Republic of Seychelles,” she said.

Abu Dhabi-based Etihad Airways also invested in a 40 percent equity stake in the Seychelles national airline, Air Seychelles in 2012, which was previously wholly owned by the Seychelles government.

Abu Dhabi has also provided more than $100 million dollars worth of development grants to the Seychelles since the start of the economic reforms to help overcome the archipelago’s economic difficulties, including a renewable energy project and the building of a coast guard base.