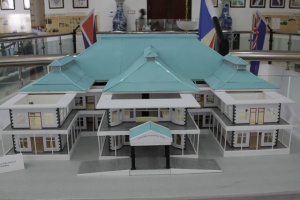 (Seychelles News Agency) - The very first Constitution Day in Seychelles has been marked with several activities among which the launching on Wednesday afternoon of the country’s first Parliamentary museum, showcasing the evolution of the island nation’s parliament from the 19th century days of British rule into its present form.

22 years ago, on June 18, 1993, a new constitution was adopted by referendum, receiving a 73 percent endorsement from the electorate.

June 18 was until last year celebrated as the country’s National Day, but a resolution was passed by the ruling Parti Lepep in May last year to ask the government to make June 29, which marks the date the Seychelles officially received its independence from British colonial rule, the new National Day from 2015 onwards. The decision was ratified in the National Assembly in July 2014.

June 29 was previously celebrated as a public holiday known as Independence Day.

The new Parliamentary museum, which is located in the upper lobby of the National Assembly building, is called 'Evolution of the Seychelles Parliament' and comprises of a collection of photographs, audios, videos, logos, maps and artefacts.

A short video presentation at the launching ceremony revealed some of the events, personalities, challenges and achievements linked to legislative activities in Seychelles.

Before joining Seychelles President James Michel in unveiling the museum's commemorative plaque, the Speaker of the National Assembly, Dr Patrick Herminie, called it "the first step in the journey of a thousand miles, a clear manifestation of our intention and determination to eventually have a proper museum as an integral part of the National Assembly building."

Herminie said the museum tells the story of the Seychellois struggle for legislative representation, the fight for independence, the one-party era and the return of multi-party democracy 22 years ago.

"In a sense, the museum enables us to experience history, allowing us to travel through time and discover the milestones of our democracy; to see first hand how race, class and gender barriers were torn asunder and their pieces cast into the wind," he said.

Herminie also noted that Seychelles' legislature presently boasts 47 percent women representatives, a figure which is among the highest in the world.

The National Assembly's Head of Information Services and Library, Tania Isaac, who coordinated the setting up of the museum told SNA that it took the Library section around five months to complete the project.

Isaac said she received some training from the Australian Parliament in Canberra, that has expertise in the field.

The theme 'evolution’ chosen by the Library section is to testify to the progress made since the establishment of the first Legislative Council in 1903, the year Seychelles became a separate British colony from Mauritius.

Precious few photographs or documents remain of those early days.

The museum however features information and artefacts of some of the country's most important political figures, including former Seychelles presidents James Mancham and Albert Rene, and current President James Michel.

Also featured are notable parliamentarians, including Joachim Arissol, the first ‘Creole’ Seychellois, or person of colour, to be appointed to the Legislative Council under British rule in 1941 and the late Supreme Court Judge, Andre Sauzier, who chaired the first Constitutional Commission.

Notable female politicians are also honoured, such as the Seychelles’ first female politician, Dr Hilda Stevenson-Delhomme, who was first appointed as a Member of the National Assembly (MNA) as early as 1951, Rita Savy, who was proportionally elected in 1975 in President Mancham’s coalition government, and Ginette Gamatis, who was Seychelles’ longest-serving female parliamentarian, representing the main island of Mahe’s western district of Port Glaud from 1983 until her retirement in 2011.

The exhibits also make use of touchscreen technology to stimulate visitors to the museum into understanding the past, so as to help shape the future.

The touchscreen display gives a taste of memorable moments from the archipelago’s history: the return of multi-party politics in 1992, the tunes of the three national anthems since independence; all the State of the Nation Addresses by Presidents Rene and Michel since 1994 and the current electoral map showing the locations of the 25 constituencies.

In a corner of the museum is a collection of gifts from foreign dignitaries to the National Assembly. Besides many plaques and decorative vases, there is a marble elephant - a gift from former Indian President Pratibah Patil - and a model of the brigantine 'Couronne', which was presented to the National Assembly by the former Prime Minister of Mauritius, Navin Ramgoolam during a visit to the Seychelles in June 2012.

Opening times of the museum to the general public is on weekdays during working hours from 8.00am to 4.00pm.