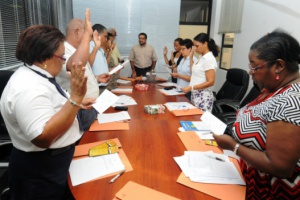 File Photo: Electoral officers are sworn in at the Seychelles Electoral Commission at the beginning of the annual voter registration period. New amendments to the Elections Act that allow year-round registration and inspection of the voter's roll came into force on Friday. (Seychelles Nation)

This follows the implementation of new elections regulations, as the amended Elections Act of 2014 along with the amended Political (Registration and Regulation) Act 2014 came into effect on Friday May 15, as they were published in Official Gazette, by the order of the Seychelles President James Michel.

Amendments to the Elections Act and the Political Parties Act were passed in the National Assembly in December last year after which it was assented by the President.However, the commencement date was not specified until now, in a bid to give the Seychelles Electoral Commission enough time to organize the necessary logistics to implement the changes to the elections act.

The provision for year-round voter registration and inspection of the electoral roll is only one of the changes that feature in either the new Election law or the amended Political Parties act.

Most of the changes are recommendations that came out from the Electoral Commission’s engagement with various stakeholders including the general public.

There was also the Electoral Reform Forum (ERF), an exercise that started late 2011, involving members of the Electoral Commission (EC), representatives of political parties, the civil society as well as a representative of the Office of the Attorney General.

Apart from allowing the all year voter registration process which replaces the over 20 year practice of having a two-week window for registration every January, copies of the Register of Voters will also be made available at every district administration offices across the country as well as at the archives section at the National Library Building in the capital of Victoria and to each registered political parties.

Previously the name of a citizen who would be turning 18 years on any day within fifteen months from January was automatically added to the register. However under the amended law, now a person will have to personally register as a voter only if he/she is aged 18 years and above.

“The onus is now on the voters to come and register…People who want to vote will have to register, if they do not register they will not vote,” said Beatty Hoareau, a member of the Electoral Commission during a meeting with the media on Friday regarding changes to the Elections Act which followed a similar briefing with representatives of the various registered political parties in the country.

While the new law also makes provision for the publication of certified Register of Voters by March 31 each year, in the event that an election is called before the certification of the register or if there is a by-election a revised register will have to be certified.

“…once the Electoral Commission announces by Gazette the date of the election, that date that will be cut off date for registration, we stop registering people on that day and any verification that we have done until then will be included in what we call the revised register,” explained the Chairman of the Electoral Commission, Hendrick Gappy.

Registration of voters shall resume only the day after election results have been announced.

Qualified voters are nevertheless being cautioned not to wait for the last minute even though the voter register will remain open all year round because if an election is called and the required timeframe needed, for example, to verify their registration details including if there has been an objection is not available, that person will not be allowed to vote.

To facilitate the year round process, five registration centres become operational today and will be open during working hours from 9.00 am to 3.00pm from Monday to Friday as stipulated by the ammended elections act. One is located at the Electoral Commission’s office mainly for the central districts of the Seychelles main island of Mahé. The other four will be located at Beau Vallon for the northern region districts, Anse Aux Pins for eastern coast districts, Anse Royale for Southern Mahé districts and Anse Boileau for Western Mahé districts.

While qualified voters will be able to verify their names in all of the 25 electoral districts it is only at the registration centres that people will be able to make objections, register as new voters, transfer from one electoral area to another and make changes to personal information.

A new provision in the electoral law has also been made to enable the Seychellois living abroad to register and to vote. However, this will require certain conditions.

For example, they should hold a national identity card and they must have spent at least three months in the country before they can register.

Another amendment made states that detained persons, either in holding cells or prisoners awaiting trial or who are serving prison sentences of less than six months can also register to vote.

On top of that Gappy said nine new registration and assistant registration officers have also been recruited and trained, while adding that the commission has embarked on a process and will see as things progress if more people will need to come onboard.

“We are prepared if people come to register…If the transactions are on the increase we will do the necessary to recruit more,” said Gappy.

The number of registered voters to date is 72,200 out of the Seychelles population of around 90,000.

The next presidential and parliamentary elections are both scheduled for 2016. Recently there has been a lot of speculations about the elections being held before the end of 2015.