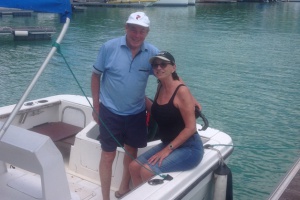 British tourist Sandra Jolly, pictured with friend Robert Mackenzie aboard the Island Thyme. The two British nationals were stranded in the sea when the boat broke its mooring and drifted away during a snorkelling session in the nearby marine park. (Sandra Jolly)

(Seychelles News Agency) - A 68-year-old British tourist to the Seychelles has revealed her brush with death after a late-afternoon snorkelling session in the Sainte Anne Marine Park went horribly wrong.

Sandra Jolly, a cosmetic dermatologist from West Sussex, England, was visiting her good friends Marice and Robert Mackenzie who live on Eden Island, a private reclaimed island development in the Indian Ocean archipelago, when a freak accident turned a relaxing swim with the fishes into a terrifying two-hour ordeal in the ocean.

Despite the fact that the waters surrounding the archipelago are calm and warm, the sheer power and size of the ocean can at any time prove overwhelming against tired muscles and bad visibility.

The two British nationals reached out to SNA to tell of their experience and warn other visitors to always take proper safety precautions before heading out to sea for diving or snorkelling.

On Thursday April 9, at around 4pm, Sandra and Robert, both PADI-qualified and experienced divers, decided to go out for a brief hour-long snorkel around Cerf Island, one of the offshore islands located in the popular tourist attraction of the marine park, situated not far away from the main island of Mahé.

Safety gear ‘did not seem necessary’

Sandra and Robert set off by themselves with fins, snorkels, masks and life jackets in Robert’s little boat ‘Island Thyme’, eventually selecting a spot just off the southern point of the island with a depth of around two metres to drop anchor in.

“As I had trodden on a sea urchin a few days previously, I was reluctant to remove my dive shoes to put on the fins, plus as it was so shallow and we were only snorkelling around the boat it did not seem necessary, and neither did the life jacket,” Sandra told SNA ruefully.

After getting into the water and exploring the reef, the two decided to swim off to another spot a small distance away. After around twenty minutes, Robert came to the surface and realised that his boat was drifting away on the horizon.

Swimming to try to catch up with the boat, Sandra soon fell far behind Robert, who knew that without the boat, they would be in trouble.

“As hard as I swam and as much as I tried to keep up with him, I was losing distance,” she recalled.

Tired out by the current, Sandra was slowly pulled away from the marine park and closer towards the deep shipping lane which serves the nearby port of Victoria.

“I lost sight of Robert, but I could still see the boat, so I figured if I just keep the boat in focus, soon I would see Robert boarding it,” she said. “From my diving days, I know how important it is to keep an eye on the time, so I was constantly looking at my watch – an hour passed and I was still trying to reach the boat with no success, but yet I had not seen Robert get aboard.”

Panic washing over her, Sandra tried to keep her mind focused on the boat as she drifted closer and closer to the deep blue waters of the shipping lane. With speed boats and yachts passing by and creating unpleasant swells, Sandra frantically tried to make emergency hand signals to alert someone to her plight, but to no avail. With the sun slowly setting, the chances of anyone seeing her in the water were getting slimmer by the minute.

Sandra told SNA that her thoughts then slowly started to turn towards despair, imagining her death and the family and fiancée she would be leaving behind, and wondering if Robert too had succumbed to the waves before reaching the boat.

Suddenly, Sandra saw Robert on board the Island Thyme, but her hope turned to confusion and then utter desolation as she saw the boat turning away from her and heading towards the coast, despite her screams in his direction.

Trying to keep herself from exhaustion and panic, Sandra said she tried changing positions every ten minutes and talking to herself until her arms and legs were too exhausted to move any longer.

“I thought of a TV show or film where someone is just about to fall from a great height or drown, give in some way, let go of life. Then the idea that I could just relax, lie back, give in and die frightened me so much that if I did that someone might arrive two minutes after I die,” said Sandra.

Saved in the nick of time

Back on the Island Thyme, 77-year-old Robert had survived an arduous hour-long swim, caught up with the boat and faced the difficulty of getting back on board a moving yacht.

Once on board, Robert saw that the boat’s entire anchor, rope and chain had become detached from the boat and fallen into the sea, which had caused the boat to drift. Realising that he would not be able to bring the vessel to a stop when he found Sandra, much less even pull her onto the boat by himself, he decided to head to shore to look for help.

He travelled along the shoreline asking other boats if they had seen a woman in the water, but then he saw the neon yellow tip of her snorkel in the distance and started heading back in her direction.

Sandra had seen Island Thyme coming back in her direction and had waved and screamed her friend’s name until she passed out in the water, slowly beginning to drown.

As luck would have it, Robert came across a private boat carrying six divers and an instructor returning to Mahé. He hailed them, explained the situation, and the skipper quickly followed the Island Thyme back out to sea to search for Sandra.

“My next recollection was four young men holding me up in the water trying to put towels under my body to lift me into the Island Thyme,” said Sandra.

33-year-old Leister Madeleine from Mont Fleuri was the skipper of the yacht that was involved in the rescue, and he told SNA that everyone on board was very happy to have been able to help Sandra.

“I was returning from a diving charter in the marine park with six divers and one instructor on board. I saw him [Robert] in the boat, and he told us he needed help to find his friend,” said Madeleine.

“I saw her waving but by that time she was very tired because she had been swimming against the current. He needed help to get her out of the water. By the time we got to her she had already passed out and had swallowed a lot of water.”

The good Samaritans had jumped into the ocean and used towels on board their boat to hoist her onto the boat, and placed her on sponge mats and covered her with more towels.

In a state of shock, Sandra’s body temperature had dropped and her pupils had dilated, but the divers rubbed her arms vigorously to get her warmed up again and continuously tapped her face and talked to her to keep her alert.

“Once we had got her on board and stabilised her we got in touch with the Village Management Association on Eden Island to inform them so that an ambulance would be waiting when we landed at Eden,” said Madeleine.

“It was the first time that I’ve had to help someone under these kinds of circumstances, and in the state she was in – she had passed out and taken in a lot of water – it was a great experience,” said Madeleine.

One of the men aboard the yacht was a trained health professional, and Sandra credits him as being instrumental to her survival.

She was transferred to Seychelles Hospital, the main hospital in the Seychelles capital of Victoria, where she spent four nights, and was placed on a ventilator in the Intensive Care Unit for two days to get rid of the water in her lungs.

Madeleine shared some sound advice for people who wish to go on a snorkelling expedition.

“There should always be two people on the boat: a skipper and a deckhand, so that if something happens, you will have someone on hand to help pull people out of the water,” he told SNA. “And they should always keep an eye on the snorkellers to ensure that they know where they are at all times.”

Robert, who is a Rotary Club member and has lived on Eden Island since 2008 with his wife Marice, also circulated an email to the Village Management Association to warn other boat-owners to be as safe as possible when going on outings, such as always having a mobile phone on board to call for help and always having some means to attract the attention of others on the person in case of emergencies.

'I thank them for my life'

Sandra, who was released from hospital earlier this week, has been mulling over some important life lessons from the experience, but most of all she is grateful to her rescuers, to Robert and to the medical staff at the hospital for saving her life.

Scheduled to take her return flight to the UK on Friday evening, the vibrant Sandra has spent her last few days getting back to normal and enjoying everything the islands have to offer – except, of course, for swimming, which, given her unabated love for the ocean, she says is a real blow.

It seems that Sandra, who loves sports and is looking forward to getting married to her fiancée Philip later this year, is still very much a force to be reckoned with, and with her happy and optimistic outlook, is likely to get back in the water as soon as the next opportunity presents itself.

“I’ve still got loads of things to do!” she said cheerfully.

If her frightening experience has not dampened her love for the ocean, it certainly has not made her think negatively of her holiday experience in the Seychelles either.

“Apart from the fact that I’ve been waylaid, even the experience of being in the hospital was one that I’ll never forget, and it has not spoiled my holiday at all,” she said. “I’m a very philosophical person and it’s made me appreciate everything – I’d come here again in a shot.”