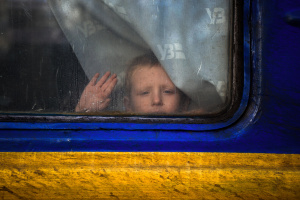 A child looks through a evacuation train's window in Pokrovsk, in the Donetsk region, on November 30, 2022, amid the Russian invasion of Ukraine. (Photo by ANATOLII STEPANOV / AFP)

(AFP) - European Union chief Ursula von der Leyen on Wednesday floated the idea of a "specialised court" to put Russia's top officials on trial over the war in Ukraine.

On the ground, Russia said it had captured a few settlements in eastern Ukraine, eager for a win after a series of setbacks since invading its pro-Western neighbour in late February.

Von der Leyen suggested a specialised tribunal to prosecute Russian officials over the conflict that has killed thousands and displaced millions from their homes.

"While continuing to support the International Criminal Court, we are proposing to set up a specialised court backed by the United Nations to investigate and prosecute Russia's crime of aggression," she said.

The chief of staff to Ukraine's President Volodymyr Zelensky welcomed the idea, saying: "Russia will pay for crimes and destruction."

But the initiative faces formidable legal and political obstacles.

The main problem is that the International Criminal Court (ICC) does not have jurisdiction over Russia's "crimes of aggression" -- its invasion and war in Ukraine -- because Moscow is not a signatory to the court's treaty.

That tribunal can therefore only judge specific cases of war crimes and crimes against humanity perpetrated in Ukraine, but even then Russian President Vladimir Putin and his prime minister and foreign minister enjoy immunity from prosecution while in office.

The only way the ICC can be called in to judge Russia's war is through a decision by the UN Security Council -- something that is impossible because Russia, with its permanent seat on the council, would veto it.

Von der Leyen is instead proposing to have a court set up in an EU country that could tackle Russia specifically on the crime of aggression, while leaving war crimes and crimes against humanity to the ICC.

The Netherlands, which already hosts the ICC in The Hague, has indicated its willingness to establish the mooted new court on its territory.

"It is our task, as the international community, to make sure that we do justice," Dutch Foreign Minister Wopke Hoekstra told journalists in Romania, as he attended a NATO meeting.

He said that should be done "through the ICC -- but also through other measures".

In embattled eastern Ukraine, Russia said it had captured a few settlements in its drive to seize control of the town of Bakhmut.

Russian troops are desperate for a win after retreating from the southern port city of Kherson and northeastern region of Kharkiv in recent months.

Once known for its vineyards and cavernous salt mines, Bakhmut has been dubbed "the meat grinder" due to the brutal trench warfare, artillery duels and frontal assaults around the city.

Russian mercenaries, prison conscripts and newly mobilised troops are believed to be fighting for Moscow in the area.

The Institute for the Study of War said that "Russian forces made marginal gains around Bakhmut on November 29, but Russian forces remain unlikely to have advanced at the tempo that Russian sources claimed".

Also on Wednesday, Kyiv boosted security as its embassies abroad after a security guard at its mission in Madrid was lightly injured while opening a letter bomb addressed to the Ukrainian ambassador.

He was discharged from hospital on Wednesday and later returned to work, Ukraine's ambassador to Spain Serhii Pohoreltsev told Spanish state television, blaming Russia for the attack.

Western countries have rushed military aid to support Kyiv's forces since the invasion, as well as issuing various other forms of support.

Britain on Wednesday unveiled a new round of sanctions on Russian officials over the war in Ukraine, targeting those accused of spearheading recent mobilisation efforts and the recruitment of "criminal mercenaries".

And German lawmakers approved a resolution declaring as "genocide" the 1930s starvation of millions in Ukraine under Soviet leader Joseph Stalin, adopting language used by Kyiv.

Kyiv regards the 1932-33 "Holodomor" -- Ukrainian for "death by starvation" -- as a deliberate act of genocide by Stalin's regime with the intention of wiping out the peasantry.

At an event organised by The New York Times, Zelensky criticised US billionaire Elon Musk's proposal to end Russia's offensive in Ukraine and invited him to visit his war-scarred country.

"If you want to understand what Russia has done here -- come to Ukraine and you will see it all for yourself," he said.

"And then you will tell me how to end this war, who started it and when it can be ended."